Nicola is a lecturer in Production Animal Science.  She is particularly interested in the husbandry of farm animals and how this can impact on their health and welfare. Her research is based around the use of novel technology to improve welfare and production of farm animals.  Further research interest include the nutrition of the young animal - particularly weaning strategies for dairy calves and pigs.

Nicola has worked on a number of livestock units prior to graduating from Harper Adams University in 2003 with a BSc in Agriculture with Animal Science.  She then had position as a research technician in the at CEDAR (University of Reading), during this time she worked predominantly with dairy cattle and calves.

Nicola joined the RVC in December 2017.

Nicola's research is focused on ways to improve welfare on commercial farms.  She has studied nutritional and enrichment strategies to improve production and welfare of young pigs and calves.   Nicola has supervised a PhD project on the effects of lameness on oestrus detection in dairy cattle (Amanda Ward).   Nicola is currently supervising two PhD students, one is looking at calf housing and the other looking at material behaviour in mares.

Glover, J., Amory, J.R., Lumbis, K and Blackie, N. (2016) Effects of single and double feeder space on the feed intake and growth performance of pigs post-weaning from four to eight weeks of age. Proceedings of British Society of Animal Science. 106. 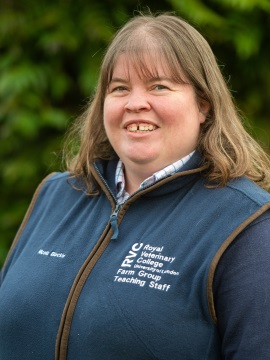