An international group of scientists has constructed a robot, which is able to recreate how a 300 million-year old animal would have walked.

This pioneering project is key to enhancing our understanding of how vertebrates first evolved to walk on land. The findings are a result of a collaboration between teams from the EPFL in Switzerland, Humboldt University of Berlin and the Royal Veterinary College. 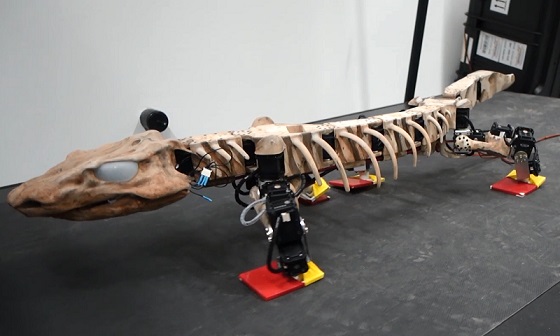 Researchers conducted this study by analysing the fossilised skeleton and footprints of the extinct Orobates pabsti - a species which marks a key point in the evolution of land vertebrates before they diverged into the lineages leading to reptiles and birds on one hand, and mammals on the other. The team then cross-referenced the digital models of the fossils with the movements of similar modern animals, such as iguanas and salamanders, to create computer simulations of how Orobates most likely walked.

Bio-robotics experts used these simulations to build a robot named OroBOT. The robot replicated the size and possible gaits of the extinct animal, allowing the team to test their theories with real-world physics. The team then factored in other variables, such as energy use and stability of movement to produce a small group of the most probable gaits. The resulting gaits are notably advanced in comparison to the gaits of earlier four-legged animals and resemble those of the modern day caiman.

The approach used in this project is intended to be adapted by researchers to study other fossils and forms of locomotion in the future. The findings are also available on an interactive website: Robotic vertebrate comes to life

Professor John Hutchinson of the Royal Veterinary College, co-author of the project’s paper, commented on the ground-breaking project: “This was a major eight-year international collaboration of engineers, roboticists, palaeontologists, biologists and more. It was a thrill to be involved in this epic study, which raises the bar in terms of novel methods in evolution and biomechanics while addressing a fascinating question about vertebrate evolution. It was surprising to find out that this somewhat primitive-looking fossil would have had some advanced characteristics in its posture and gait. And the greatest pleasure of this study is that our interactive website allows anyone to derive their own conclusions about our work.”