A new study, involving scientists from the Royal Veterinary College (RVC) in England and the Institute of Cytology and Genetics (ICG) in Russia, has found that all songbirds have an additional chromosome in their germ cells unlike other avian species.

This discovery has an important implication for our understanding of genome evolution and represents a significant breakthrough in understanding the genetic make-up and genome diversity of birds.

Somatic, or normal, cells have two copies of each chromosome. Germ cells typically have the same set of chromosomes as a somatic, or normal cell, but only one copy of each chromosome when developed into sperm or eggs, depending on gender. The additional chromosome found in the germ cells of songbirds is not presented in their somatic cells and is referred to as the ‘Germline Restricted Chromosome’ (GRC). Songbirds are the largest group of birds, meaning that nearly 6,000 of the 10,000 existing avian species have the GRC.

GRC is transmitted to offspring from mothers and is discarded from all somatic cells of the offspring in the early stages of development. GRCs are also present in male germ cells, however GRC is thrown away before they turn into sperm and so do not pass to offspring via the father. 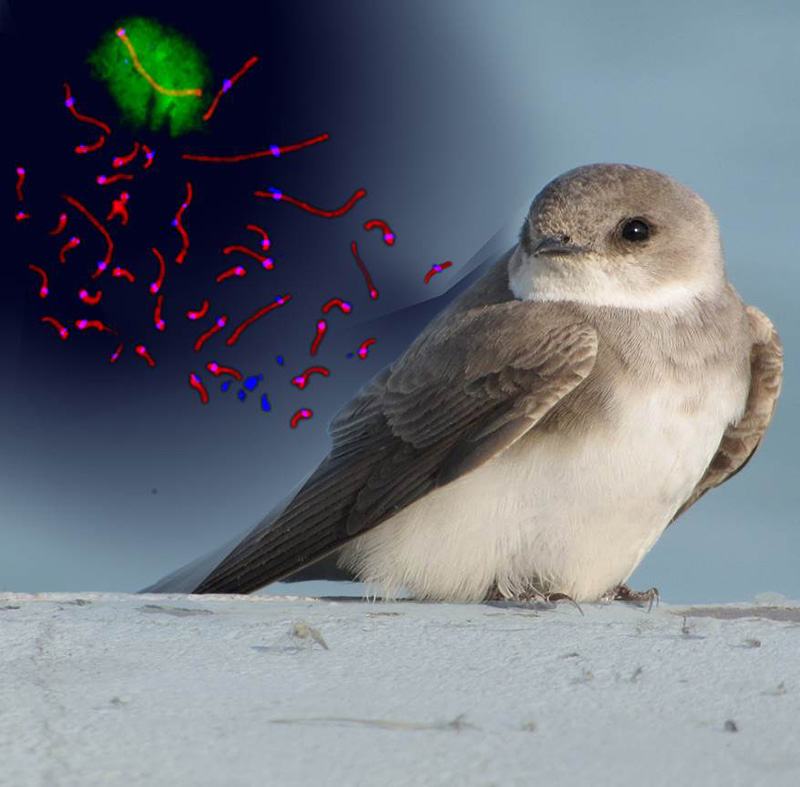 The first GRC was reported for zebra finch more than 20 years ago but was considered a genetic oddity until this study. The new research shows that GRCs are a key feature which helps to identify songbirds as a phylogenic group (a group which shares common evolutionary relationships). During this investigation, the team did not find GRCs in any of non-songbirds, for example within chicken, terns, swifts, falcons and parrots.

To carry out this study, scientists at ICG analysed and compared the chromosomes of 18 avian species and sequenced GRCs from four different songbirds. The RVC team compared these GRC sequences to the genomes of chickens and zebra finches – these species were chosen in particular as there is a large basis of existing research knowledge for them. The team concluded that the GRC has formed in the common ancestor of all songbirds about 35 million years ago as a small additional chromosome. Over evolutionary time, this chromosome underwent changes in size and genetic content and transformed into an important component of the songbird germ cell genome.

The team does not yet know why GRCs are there and what specific advantages they can provide to their carriers. Professor Pavel Borodin the leading co-author of the paper from ICG theorised: “We believe that GRC could be a unique evolutionary mechanism to increase the number of genes which are only in need in germ cells without increasing overall genome size and as result the body weight.”

Dr Denis Larkin, Reader in Comparative Genomics at the RVC and co-author of this study, said: “It is tempting to hypothesize that GRC enabled songbirds to become the most species-rich order of birds. It allowed them to create endless, wonderful forms, and invade various ecological niches on all continents because their germ genomes have more genes than other birds meaning more opportunity for change. These findings lead to other questions such as with birds being the only survived dinosaurs, did extinct dinosaurs also have GRCs which made them so speciose?”

This work will provide a basis for further research within evolutionary genetics and the purpose of GRCs.