Dr Angela Holder was awarded a grant to host a LIDO REP summer student over summer 2019.  This was for an 8 week placement that was aimed at undergraduate students from universities where the numbers of students that go on to do PhDs is low.

The studentship was so designed to give Angela (as an early career researcher) the opportunity to design and supervise her own project from the start as well as to recruit a student.  The project that Angela designed was called Identification of genetic variants in the bovine Mannose Macrophage Receptor for new management strategies of Mycobacterium bovis infection.  Susceptibility to the zoonotic disease bovine tuberculosis is known to vary in different cattle breeds and variation in a gene encoding a receptor expressed on innate immune cells recognising bacterial sugars might play a role in this. Thus, the identification of genetic variation in the Mannose Macrophage Receptor and its functional consequences could provide new information to help eradicate this disease.

Angela and her selected student (Eike Bremerstein from Kingston University London) found that in the study sequence based typing identified a single base pair mutation in the gene encoding the bovine Mannose Macrophage Receptor. This mutation was found to cause an amino acid change in a part of the protein which is involved in sugar binding and therefore might influence how the receptor binds to bacteria. No difference between cattle breeds was observed. However, in macrophage cells from cows which possess the mutation there appeared to be an increased number of Mannose Macrophage Receptor positive cells and a higher density of receptor expression. Therefore the mutation in the bovine Mannose Macrophage Receptor gene identified in this study could be influencing the receptors functionality, which might be one explanation for differences in cattle susceptibility to bovine tuberculosis, however further work is needed.

Eike was awarded the prize for best oral presentation at the LIDo REP presentation day on 4th September 2019.

A summary of the results are shown in the slide below: 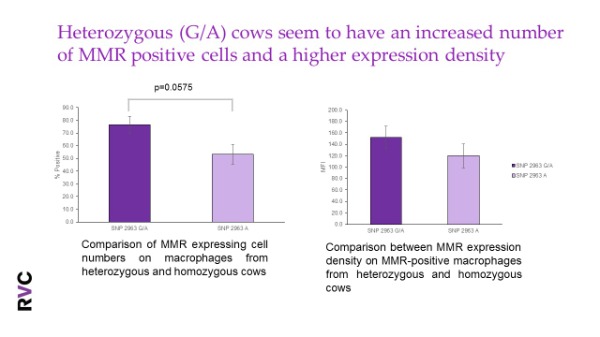