A new research contribution from the VEEPH group has recently been published on the transmission of African swine fever.

African swine fever (ASF) is a contagious viral disease of swine associated with very high lethality rates. It poses one of the biggest threats for the European pig industry because of its strong impact on pig production, pig health and the livelihood of farmers. In addition, there is neither treatment nor vaccine available to prevent its spread.

After its introduction into Georgia in 2007, the virus crossed the Caucasus and subsequently spread in the whole Western part of the Russian Federation (RF). Since 2014, several outbreaks in wild boar and domestic pig populations have been reported within the European Union (Estonia, Latvia, Lithuania and Poland).

To contribute to the understanding of the way the virus transmits, scientists from the Royal Veterinary College (RVC) and the National Research Institute for Veterinary Virology and Microbiology of Russia (VNIIVViM) collaborated to analyse the spatio-temporal distribution of ASF cases that were reported in two of the most affected regions of the RF between 2007 and 2014.

Figure 1: Dynamics of the ASF epidemic in Eastern Europe since its introduction in 2007.

Analyses showed that in both regions, outbreaks in domestic pigs that were close in space were more likely to also be close in time. This spatio-temporal interaction suggests a substantial role of the local farm-to-farm transmission through direct contacts between pigs from neighbouring farms, movement of contaminated vehicles, of people or the introduction of an infected animal from a neighbouring farm.

Results from this study stress the importance of local transmission between farms confirming the need to maintain high biosecurity standards on farms and justifying strict control measures targeted at domestic pigs such as culling of infected herds and local movement restrictions. 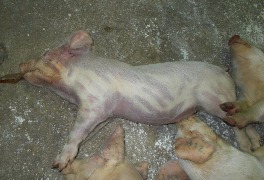