Urine is produced in the kidneys, allowing waste products to be removed from the bloodstream.

Urine passes from the kidneys to the bladder via the two ureters, which are very fine tubes. When the bladder is emptied, the waste products leave the body. If of urine is prevented at any point this leads to discomfort, a build-up of waste products within the bloodstream and can be life-threatening. 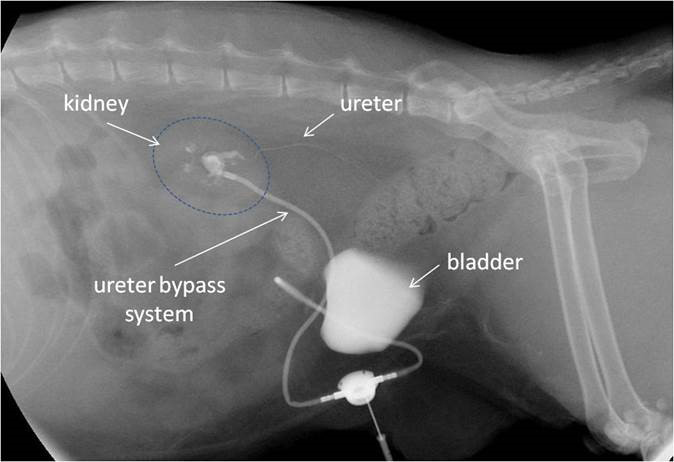 As cats, like humans, only require one normally functioning kidney to remove waste products from the bloodstream, it is common that the first blockage goes unnoticed. Cats may experience pain, but often do not show obvious signs externally and remain otherwise well in themselves. The blocked kidney can be damaged irreversibly and have very limited function.

Often the affected cats are first taken to see their vet when the second kidney is affected by a ureteric obstruction. At this stage, they have become unwell and may be in a life-threatening situation in acute kidney failure. Sometimes slightly abnormal blood results are noted when a cat is having routine blood work or investigations for another reason and the condition is identified earlier.

Note: In the early stages of the disease, there may be no obvious clinical signs

Physical examination may not reveal any obvious findings but, in many cats, the kidneys are obviously different in size on palpation; one is small and fibrotic due to previous kidney damage and the other is large and tense due to blockage. In severe cats may be and unresponsive and require urgent intervention. Blood tests show an increase in urea and creatinine and also potassium. Further changes including the body’s regulation of blood acidity are affected over time.

Urine samples are taken to check for any evidence of a urine infection, as this is important when planning further treatment.
A radiograph (x-ray) of the abdomen and ultrasound of the kidneys confirm a diagnosis of renal and/or ureteric stones and obstruction. The stones are small but 98% of them are calcium oxalate, which up readily on a radiograph. 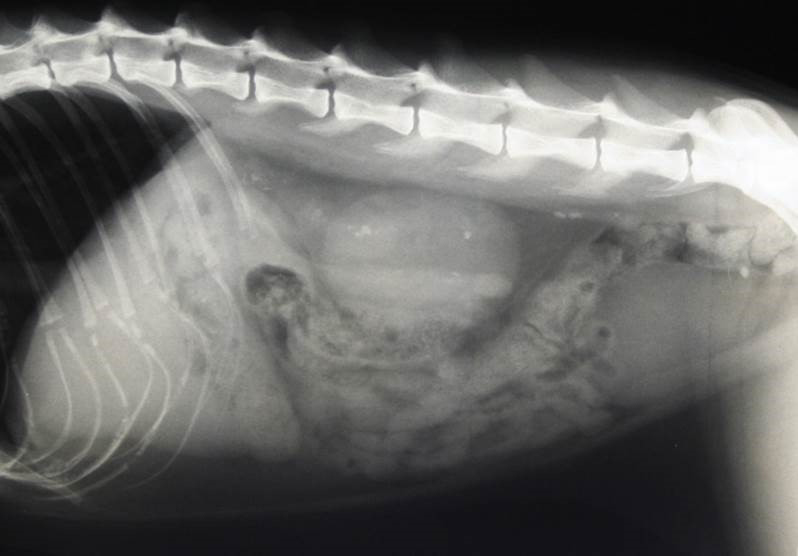 Cats range from being in a stable condition to requiring true emergency intervention. Each cat is assessed to determine the best plan for management and timing of if that is required.
In humans, the majority of stones pass and the blockage is therefore relieved. This can sometimes happen in the cat, but due to the small size of the ureter and the spikey nature of the stones (normally calcium it is infrequent. Studies have shown that cats have a much better outcome if the blockage is relieved.
Surgery to remove a stone blocking the ureter can have a high risk of complications, such as leakage and narrowing of the ureter due to scar tissue. Historically there has been a reluctance to perform surgery due to these risks and the outlook for affected cats was poor.
Innovative treatments have been developed to provide a better solution for our feline patients. Since 2014, we have been using a system called a SUB™ developed by Norfolk Veterinary Products, which is a subcutaneous ureteric bypass system. The system is comprised of a tube that is inserted into the kidney and another then is inserted into the bladder. The two are connected underneath the skin to a port that can allow flushing of the system.
The tubes are much larger than the ureter and are therefore less likely to become blocked in the future. They may prevent blockage episodes when further stones are produced. The system is placed under full general via surgery.

It is not possible to predict to what degree the effect upon the kidneys will be reversible following relief of obstruction via placement of the SUB™. Sadly, some cats may have irreversible kidney failure and show little improvement following the surgery, necessitating euthanasia.

We have had some excellent results using this system and cats appear to be comfortable and tolerate the presence of the bypass tubing well. It is very important that ongoing patient monitoring is performed for the rest of the cat’s life, in particular, to note if the device has become blocked or if a urine infection has developed. The majority of cats will have a degree of chronic kidney disease as a consequence of the condition and require ongoing management. Genetic, nutritional and environmental factors may be responsible for encouraging urinary tract stone formation in cats and research into this field is ongoing.