A Newfoundland suffering from recurrent neck pain, due to nerve root compression, was helped by a multimodal approach involving the RVC’s Neurology and Neurosurgery, Anaesthesia and Analgesia and Physiotherapy and Rehabilitation services.

Sky presented to RVC Small Animal Referrals in September 2015, aged eight, as a result of episodic neck pain. She was diagnosed with a left sided C5/6 nerve root compression, most likely the result of osteoarthritis or joint hypertrophy.

Upon discharge she was prescribed oral analgesics and a controlled exercise regime. The owners were encouraged to ensure Sky was walked on a body harness rather than neck leads and collars that would pull on her neck. They were also advised to ensure Sky avoided running, jumping and using stairs.

Sky responded well to medical management and her exercise regime but in January 2016 started to yelp in pain. She was treated at her regular veterinary practice with gabapentin, nonsteroidal anti-inflammatory drugs and codeine. However, she did not respond to analgesia and so was re-referred to the RVC.

Subsequent neurological examination at the RVC was largely unremarkable, with the exception of cervical hyperaesthesia and resentment of dorsiflexion and left lateroflexion of the neck. Differential diagnoses were discussed with the owner, including a recurrence of signs related to the previously diagnosed C5/6 nerve root compression.

Advanced imaging and treatment
MRI scans revealed a mild increase in the severity of the narrowing of the left intervertebral foramen. On consideration of the recurrence of clinical signs following conservative management, further treatment options were discussed. These included ultrasound-guided administration of local anaesthesia and steroids offered by the RVC’s sport medicine osteoarthritis and pain clinic, and surgical decompression.

The owner elected to try ultrasound-guided administration of local anaesthesia and a steroid. The procedure was performed jointly by members of the Anaesthesia and Analgesia Service and of the Diagnostic Imaging Service. Sky responded well to treatment. These injections are meant to diminish clinical signs between three months to a year. She also started receiving acupuncture from a member of the Anaesthesia and Analgesia Service, as a complementary treatment, and began hydrotherapy at the RVC to increase her exercise and help control her weight. 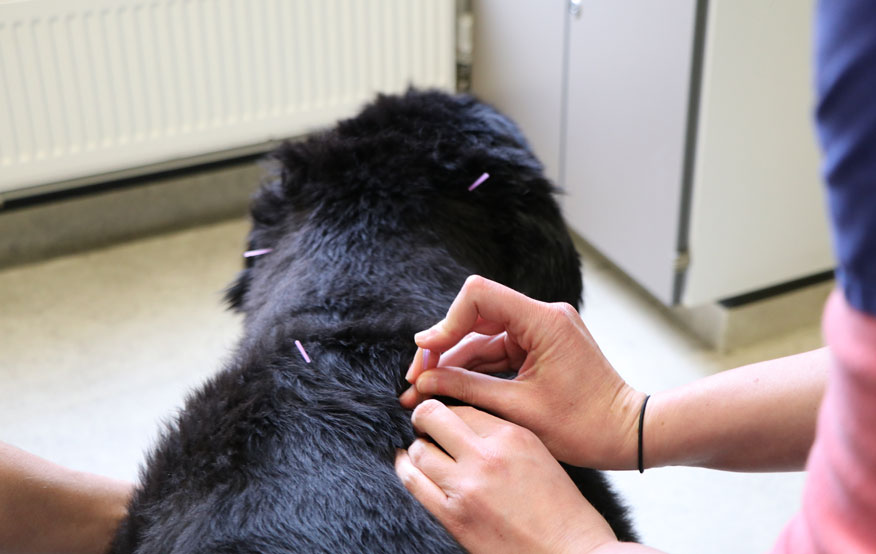 Sky was regularly evaluated by the sport medicine osteoarthritis and pain clinic by a doctoral researcher, whose research is concerned with improving diagnosis and treatment of neuropathic pain with the use of quantitative sensory testing (QST). The QST devices enable clinicians to measure pain thresholds and location in an objective manner. Sky’s owner completed pain questionnaires at each visit to track improvement.

An RVC veterinary physiotherapist assessed Sky’s mobility and gait by getting her to walk on a pressure sensing mat. As a result of the positive evaluations, Sky’s owner was satisfied that medication could be reduced with an alternative mechanism-based therapy.

In the following months, there was remission of Sky’s neck pain and lumbosacral pain. Ultrasound-guided administration of local anaesthetic and steroids was repeated with a good effect. An epidural injection with the same medication was performed to provide analgesia of the lumbosacral region. She was discharged with the advice of continued analgesia, along with controlled exercise. Upon return for regular pain assessment and acupuncture, Sky was found to be doing well.

The case illustrates the value of a multimodal and transdisciplinary approach, where clinicians with different areas of expertise work together to deliver the most valuable mix of interventions to each patient.