Jo Hedley, Head of the Exotics and Small Mammals Service

Mr T, a Sulcata tortoise, was referred to the RVC Exotics Service for assessment and treatment of a severe shell injury following a dog attack.

The chelonian shell is a sturdy structure composed of dermal bone covered with a layer of keratin scutes. However, even a sturdy shell cannot always provide enough protection against attacks. Dogs and foxes pose a risk, especially in the warmer months when tortoises are often left outside unsupervised.

Injuries are often extensive and breach the coelomic cavity, yet animals can continue to breathe normally as ventilation is not dependent on negative pressure being created by a diaphragm and intercostal muscles, unlike in mammals.

On presentation, Mr T appeared bright and active. Multiple contaminated puncture wounds were noted, with a large deficit on the right lower carapace, but he otherwise seemed in good health.

Mr T was immediately admitted to hospital for treatment with antibiotics, pain relief and initial cleaning of his wounds. Due to the extensive nature of his puncture injuries, it was important to establish if any underlying structures had been affected, so the following day a CT scan was performed. This revealed multiple puncture wounds in the plastron, which had penetrated into his body, but his internal organs appeared unaffected. 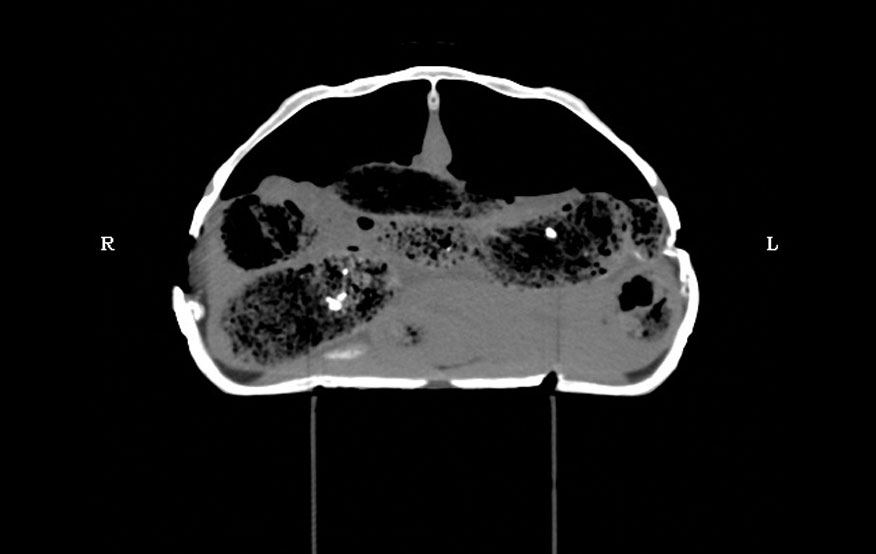 The next stage was therefore more intensive cleaning and debridement of the injuries under general anaesthetic. Multiple sequestra of bone and shell were removed, the wounds were flushed and a wet-dry bandage was applied. An oesophagostomy tube was also placed at the same time for supplementary feeding and medications as Mr T wasn’t the most compliant of patients! Following the procedure Mr T made a good recovery and returned home on continued medication and bandage changes.

Two weeks later, at his recheck appointment, his owners reported that he was tolerating medication and bandage changes well. Wound healing is notoriously slow in tortoises, but a small amount of granulation tissue was already beginning to form. A short general anaesthetic was repeated for further cleaning and wound debridement, and again Mr T made a good recovery and returned to his regular vet practice for ongoing bandage changes.

Shell injuries such as these are commonly seen by the Exotics and Small Mammals Service. Smaller more superficial injuries may respond well to treatment with topical treatment or systemic antibiotics and anti-inflammatories. A dressing is usually applied to protect the wound and well tolerated by most tortoises.

For more extensive injuries, surgical debridement under general anaesthesia may be necessary, as in this case. Where the shell is fractured, fragments need to be realigned and stabilised. Orthopaedic wires, plates and screws or even cable ties fixed with epoxy resin may be used. Alternatively, if a shell fragment is missing, as in this case, the defect may have to be managed as an open wound, with regular bandage changes to allow a granulation bed to develop. A variety of techniques may be used to encourage wound healing, including negative pressure wound therapy. This is helpful in repair of chelonian shell deficits, but involves a longer hospital stay.

The chelonian shell is capable of recovering from severe injuries, but the healing process is slow and may take several months to years depending on the original injury. Mr T has several years of healing ahead, but six months following his initial visit, his referring vet reported he is doing well and has been rehomed to a zoo, where he can get specialised care.

Sign up to get Clinical Connections in your inbox rvc.ac.uk/clinical-connections