A four-year-old Friesian mare referred to the RVC equine team for an examination of headshaking was successfully treated with a new treatment called percutaneous electrical nerve stimulation (PENS).

Two months before referral, Lottie had started shaking her head when under saddle and exhibited constant ear movement and nose rubbing. This behaviour increased over time and she also started exhibiting it in the field as well as when ridden. A corticosteroid was administered by her regular vet, but this failed to ameliorate the clinical signs.

In Lottie’s physical examination at RVC Equine she appeared bright and well. Her vital parameters were within normal limits and her general physical examination was unremarkable. A standing CT scan was performed by the RVC team to rule out structural disease of the head, such as dental or sinus conditions, that might have accounted for Lottie’s agitation and behaviour. No physical abnormalities were found on the CT images.

The investigation of headshaking involves ruling out all causes of head pain, such as dental and sinus pain, seasonal rhinitis, inappropriate responses to sunlight or any other physical causes that might result in the behaviour.

The majority of headshaking horses that do not have physical causes of pain in the head or mouth appear to have a syndrome similar to the human syndrome trigeminal neuritis, which causes facial pain and, in severely affected individuals, a tic called tic douloureux. Symptoms are due to inflammation of the trigeminal nerve, the main sensory nerve to the face, and can be so severe that some people are driven to  self-harm or even suicide.

The prognosis for horses with the condition was historically poor because there have been very few treatment options. Various medications have been tried but can cause drowsiness, which limits the athletic performance of horses and therefore can prevent them from competing.

The RVC’s Equine Referral Hospital is one of a small number of UK veterinary centres to treat horses with trigeminal-mediated headshaking with PENS. The treatment, which has been used in human medicine for some time, has proved successful in equine practice and can be conducted with just sedatives and local anaesthetic. Just like in the NHS, teaching hospitals like the Equine Referral Hospital not only have excellent clinicians and state of the art equipment but also provide high quality training environments for the next generation of veterinary practitioners and specialists. Senior clinical students benefited from Lottie’s clinical and diagnostic imaging work-up, honing their Day-1 skills, as well as learning about cutting-edge treatments such as PENS.

PENS involves a probe being inserted just beneath the skin and next to trigeminal nerve. The nerve is then stimulated for several minutes in each treatment. Generally, horses have a course of three treatments, with a number of days in between so that any improvement can be observed.

In Lottie’s case, PENS was initially performed at the RVC Equine Referral Hospital with three days between treatments. The procedure was tolerated well and for 48 hours following the second treatment, Lottie’s headshaking was reduced and she seemed more settled on the lunge. However, after this she appeared agitated once again and her headshaking behaviour increased.

As it was shown to improve Lottie’s symptoms, the recommendation was for her to be discharged and return for subsequent PENS treatment at the RVC. She was discharged with information to owners about trigeminal-mediated headshaking and about PENS neuromodulation in horses.

In discharge instructions, the owners were asked to lunge Lottie to assess her headshaking on her return home and then to do so daily afterwards. They were also encouraged to contact RVC referral vet Andy Fiske-Jackson, Lecturer in Equine Surgery, to update him on progress. 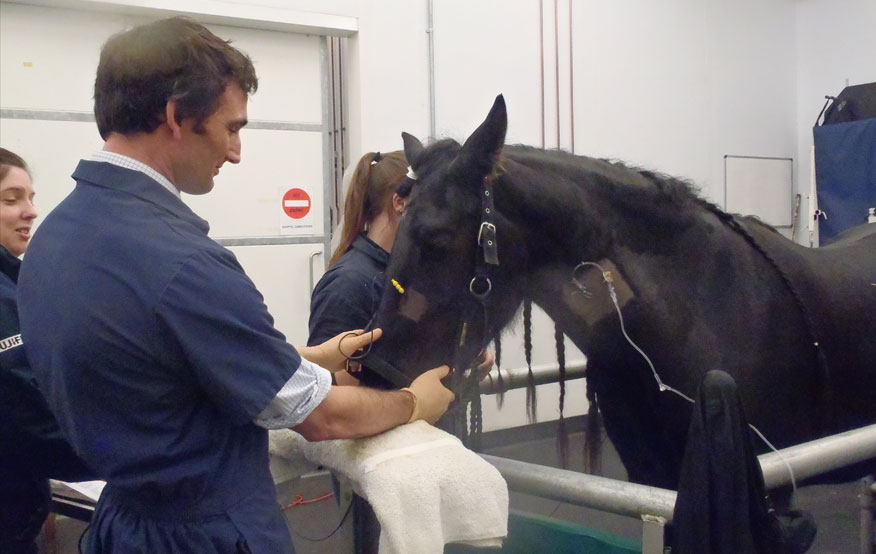 Commenting on the condition and the value of PENS for horses with trigeminal-mediated headshaking, referral specialist Andy Fiske Jackson at the RVC’s Equine Referral Hospital, said: “Headshaking is a poorly understood syndrome in which horses present with involuntary shaking movements of the head. In its severe form, it presents as violent movements of the head and neck that can render the horse unrideable. There are many possible causes, some of which have been elucidated and others that have not.”

In relation to Lottie, Andy added: “Lottie’s investigations led us to conclude that her problem was due to trigeminal neuritis. She was treated with the relatively novel therapy PENS, in which electrodes are placed under the skin over the nerve and electrical pulses are used to desensitise the nerve and so reduce pain and stimulation. The treatment has been very successful for Lottie and she has returned to normal work – a happy horse and owner!”

In an update to the RVC team, Lottie’s owner, Shelley Hill, said: “Lottie is doing great. She shows the odd sign of shaking but it is so minimal it is barely even noticeable.”