Hepatic lipidosis (HL) can be a real challenge in many species, and a problem which we are increasingly recognising in camelids here at the RVC Farm Animal Clinical Centre (FACC).

The classic ‘fatty liver’ disease in cattle involves over-conditioned dry cows losing excessive condition after calving. The disease presents differently in other species though, even if the pathogenesis is the same.

This spring we saw several cases of HL affecting alpacas, which have been serious or even fatal. The common factor is that these animals had undergone gradual weight loss over the previous three to four months, with some having lost up to 10kg, which initiates the fat mobilisation. The affected animals also tended to be females, some of which were pregnant. These have been identified as the biggest risk factors for HL in camelids. It tends to be the result of chronic weight loss with a triggering acute event, which varied in this group of alpacas from bacterial enteritis to mite infestation and dermatitis. 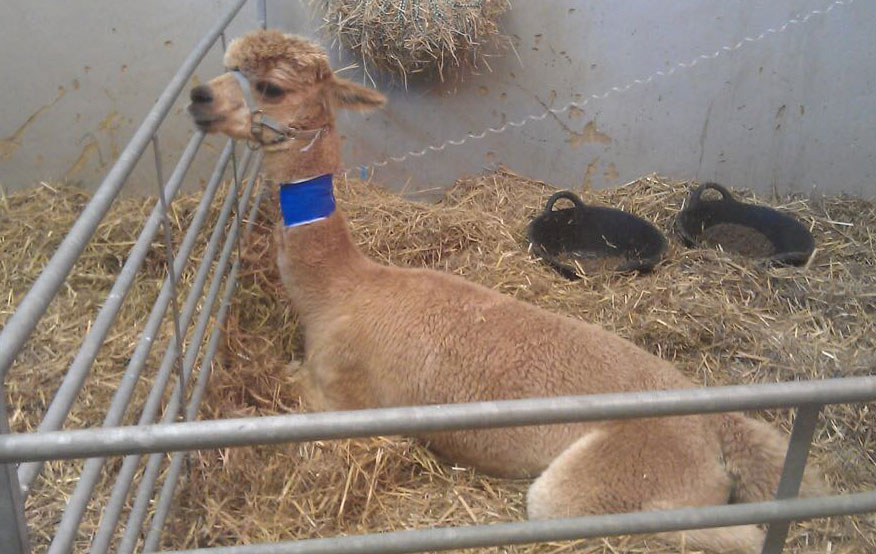 The clinical signs are non-specific in camelids, meaning this can be a frustrating condition to diagnose. The main recognisable clinical signs we saw in the presenting alpacas were chronic weight loss followed by sudden onset dullness and anorexia. On some occasions the presenting signs were surprisingly subtle considering the extent of the abnormalities seen on bloodwork, with some just being reluctant to feed that day.

On bloodwork taken on admission, AST and bile acids were found to be the most sensitive markers of liver damage and dysfunction in these cases (but interestingly not GLDH, the more typical hepatocellular damage marker, or GGT - another enzyme typically increased in cases of HL). The dramatic increases in these parameters were accompanied by increased blood lactate and followed quickly by markedly increased PT and APTT as secondary coagulopathy developed due to liver failure.

Albumin levels were decreased, again indicating hepatic insufficiency. NEFAs and ketone tested in off-site laboratories were not supportive of the diagnosis but by this point an alpaca from this outbreak had already died, a common outcome for this disease. Our pathologists confirmed HL.

There is no single treatment for HL, just intensive supportive therapies with the aim of getting the alpacas to eat and therefore enter a positive energy balance. Carefully monitored intravenous fluid therapy, proton pump inhibitors, analgesia and vitamin B1 supplementation along with supportive nursing formed the mainstay of care for these patients.

The animals that presented with increased lactate levels >10mmol/L and bile acids >100umol/L tended to die within six to twelve hours of being admitted. These animals had an on-site post mortem examination which confirmed fat infiltration of the liver and the petechiation, ecchymoses and haemorrhage associated with the secondary coagulopathy. Where the condition had been identified early and supportive medical therapy been given, the alpacas have gone on to make a full recovery. No animals were discharged until they had started to gain weight and all blood parameters were normal.

Prevention is the key with this disease. All alpacas within the affected herds were weighed and body condition scored. All those losing weight along with the pregnant females were separated into a critical care group and were given extra feed to ensure HL did not occur. It is essential that alpaca owners monitor each animal’s weight, particularly over the winter when grass is sparse and of a poorer quality. Sufficient trough space should be provided to ensure all can eat. All animals should be weighed or body condition scored once a month to prevent this commonly fatal disease.

Early recognition of these non-specific clinical signs is vital in these cases so that supportive medical care can be rapidly implemented. Our specialist critical care team, with a wide variety of treatment options available to us, work alongside our extensive on-site clinical pathology laboratory to enable us to give these animals the best chance of survival.