Jo Hedley, head of the Exotics Service at the Beaumont Sainsbury Animal Hospital

Dental problems in small mammals are seen daily by the RVC Exotics Service in Camden, with rabbits being the most commonly affected species. The more challenging cases, however, are  the smaller species which also suffer from similar problems.

Hystricomorph rodents, such as guinea pigs, chinchillas and degus, all have constantly growing incisors and cheek teeth similar to rabbits, making them susceptible to much of the same dental pathology. Problems range from minor overgrowths and spur formation, to severe malalignment and abscessation. Causes can include inappropriate diet, genetic malformations or trauma.

Skull imaging is vital to help us understand the extent of disease. Advanced diagnostics, such as CT scans and oral endoscopy, can be useful in these smaller patients to identify more subtle problems and help plan therapeutic procedures.

Corrective dental procedures, including extraction of affected teeth and extensive abscess surgery, are associated with very good outcomes in many of these patients, providing disease is not too severe and they are otherwise in good health. 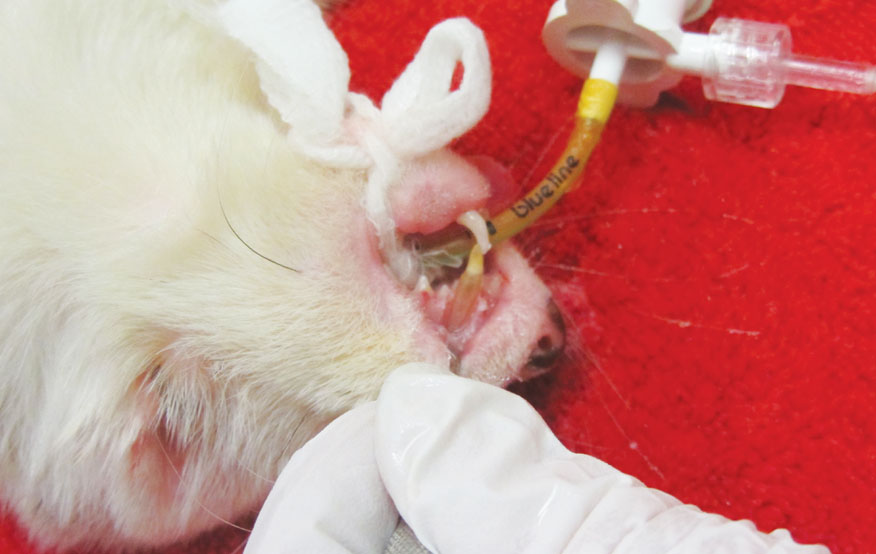 Ferrets, in contrast, share the type of  dental and periodontal diseases encountered in dogs and cats such as gingivitis, calculus and caries. Fractures or damage to the canines also appear particularly common, often secondary to abnormal chewing behaviour, especially if confined in a cage  for long periods.

Dental disease might not seem the biggest issue for a pet lizard, but can be a common problem for some species. One recent survey in fact revealed that up to 35% of bearded dragons seen in the veterinary clinic had some degree of dental abnormalities.

Dental disease is lizards is generally thought to be a disease of captivity associated with inappropriate diet, such as too many soft fruits or waxworms. Long term, these diets appear to result  in the development of plaque, subsequent build-up of bacteria and then gingivitis and calculus formation - similar  to humans.

Dental problems may be a consequence of trauma and subsequent infection. Prompt treatment is required to prevent significant pain and spread of infection. Unfortunately, animals may not show signs of a problem and so owners are often unaware of the extent of the disease until it reaches a fairly advanced stage.

Prevention of dental disease in lizards usually involves dietary changes to reduce bacterial build-up and increase plaque removal. Feeding of invertebrates like crickets and locusts, rather than softer mealworms or waxworms, has been suggested to help with this, as well as ensuring sugary fruits and vegetables are minimised. These dietary changes have the added advantages of helping to prevent weight-related issues such as fatty liver, heart disease and joint problems. The key is detecting problems early so easy adjustments can be made.

The RVC’s Exotics and Small Mammals Service is the only specialist exotics service in central London “As the only full-time exotics service at an English veterinary school - seeing such a broad range of species with a wide variety of dental problems is very valuable for the education of our students. Our team handle rabbits, small mammals, reptiles, birds, amphibians, ornamental fish and invertebrates”