Dan is a Professor in Small Animal Surgery, a European and American Specialist in Small Animal Surgery and Chairman of the Board of Regents of the European College of Veterinary Surgery (2019/20). Dan is the Director of the Cardiothoracic Surgery Service at the RVC which performed over 60 open heart operations in the last 12 months.  He is also a provider of Continuing Professional Development worldwide.

Dan graduated from Liverpool University in 1987. After eighteen months in practice at the Churchfield Veterinary Centre in Barnsley, he began a residency in small animal surgery at the University of Liverpool. Dan gained an RCVS Certificate in Veterinary Radiology in 1990 and a Certificate in Small Animal Orthopaedics in 1991.

In addition to being an active small animal surgeon, Dan has held many administrative roles at the RVC: as head of the surgery service, head of small animal medicine and surgery, head of the department of Veterinary Clinical Sciences and head of the department of Clinical Sciences and Services.  He is currently Director of the Cardiothoracic Surgery Service which performed over 60 open heart surgical procedures over the last 12 months.

For an up to date list of publications, please use the following link:

Dan lectures in the respiratory and cardiovascular modules on the BVetMed undergraduate course as well as providing practical supervision and teaching to final year students and residents whilst on clinics. His is also a worldwide provider of CPD, lecturing at many institutions and conferences, including the BSAVA, WSAVA and the North American Veterinary Conference, ASAVA and FASAVA. 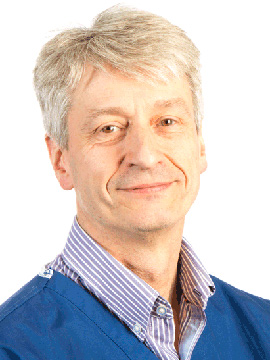