Musculoskeletal biomechanics and neuromuscular control of vertebrate limbs.  Vertebrate limbs are capable of diverse movements owing to their intricate musculoskeletal architecture.   Using frogs as models, we seek general neuromuscular-mechanical principles which we can apply to understand other vertebrates including humans.  Our aims are 1) to explore how structure-function relationships evolved in early amphibians, 2) to understand how musculoskeletal architecture relates to neuromuscular control (e.g. stability, accuracy, robustness) and, 3) to determine how healthy limb function can diminish with age, disease or injury.  Towards these aims, we integrate interdisciplinary approaches including experimentation, computational modelling and robotics with an emphasis on developing novel methodology and instrumentation.  Please check out our latest video or click the "Research" tab for current projects.  Check twitter for information on job/studentship openings in the lab and further lab developments.

Chris holds degrees in Biology and Violin Performance (Oberlin College & Conservatory, OH, USA). In 2009 he earned a PhD at the Concord Field Station under the supervision of Andrew Biewener in 2009 (Harvard University, MA, USA). From 2009 to 2014 Chris established the Propulsion Physiology Lab under a Jr. Fellowship at the Rowland Institute (Harvard).From 2014-2019 He was a European Research Council research fellow in the Structure and Motion Laboratory. He joined the CBS department as a Lecturer in 2019.

Firstly, we want to understand how animal limbs (arms or legs) are able to extend rapidly and accurately to accomplish tasks such as reaching, jumping, running or swimming.  In an evolutionary context, we are interested in the underlying musculoskeletal and neuromuscular features that contribute to effective limb motion.  Secondly, in a biomedical context, we want to understand how musculoskeletal ageing affects those neuromuscular features to better understand how age affects limb control in humans.

Project 1: Effects of muscular ageing on neuromuscular coordination
Funded by Wellcome Trust
Aim: To determine how ageing influences neuromuscular coordination.
Background: The neuromuscular systems of limbed vertebrates, including humans, solve a profoundly difficult task – they can control multi-jointed limbs with accuracy, robustness and speed.  Such impressive control owes to visuomotor, sensorimotor and muscle-dynamical processes that appear to be “mechanically tuned” for effective limb movement.  Elderly adults suffer from deficits in all three processes, putting them at grave risk of falling.  Our work focuses on the changing muscular dynamics due to aged connective tissue.  Specifically, we hope to link connective tissue stiffening with a change in the nervous system’s ability to control limb movement.
We ask:
a) How do muscle intrinsic properties help confer speed, accuracy and robustness in a healthy limb?
b) How does ageing influence the above?
c) Can we develop an in vitro assay which mimics the effects of age such that we can test treatments/therapies?

Project 2:  Evolution of Amphibian Locomotion
Funded by European Research Council
Aim: To isolate, measure and predict how variations in limb musculoskeletal architecture drive locomotor diversification.
Background:  All frogs “look like frogs”, yet they exhibit rich locomotor diversity over thousands of species.  Depending on their environment, they can either climb, jump, run, swim and dig.  Even a single frog species is able to perform varied tasks with their limbs as they climb, jump, swim or run through their environment.  Because of their impressive attributes, frogs are exquisite models to understand both the neuro-muscular function and evolution of vertebrate limbs, in general.
We ask:
a) What are the lower-body anatomical features that confer limb “multi-functionality” enabling certain species to walk, jump and climb?
b) When did limb multifunctionality evolve and what role did it have in shaping early frog evolution?

METHODOLOGY
The questions we ask often demand novel experimental approaches as well as computational modelling and simulation.  To make progress, we must consider several aspects of neuromuscular function including: a) muscle properties (e.g. speed, strength), b) skeletal morphology, c) limb architecture (how muscles connect to bones) and d) sensorimotor feedback.  Although traditional experimental approaches address these properties in isolation of one another, they are all interdependent. For example over the course of evolution, if an animal transitions from water to land, we expect that the muscle properties must also change in concert with morphological shifts.  Furthermore, we expect that the internal skeletal structure (e.g. the length of bones or bony processes) would also adapt. Hence, we attempt to understand how muscle properties, limb internal anatomy and external anatomy are 'tuned' to one another to confer effective locomotion.  Additionally, as an animal (or person) ages, there are changes to the musculoskeletal system; how, then does the nervous system adjust or adapt to maintain control?  We are interested in developing novel robotic, physiological and computational tools to understand how various properties interact.

Musculo-robotics:  We have developed a technique for measuring a muscle’s response to varying environmental conditions.  For example, a foot pushing against solid ground behaves differently than in water.  This is the case because physical forces profoundly influence muscle contractile behaviour.  Even given identical motor stimulation from the nervous system, a muscle’s mechanical contribution to limb movement varies depending on locomotor terrain (or substrate).  Studying muscle-limb-environment interactions is challenging because when terrain changes (e.g. gravel versus sand), both the intrinsic muscle response and motor stimulation may change simultaneously.  How can we isolate the effects of muscle-load interactions from sensorimotor modulation?  Our approach is to build a robotic limb model which is in contact with an arbitrary surface (e.g. water, sand, solid ground).  The robot is electronically coupled to an in vitro muscle via closed-loop communication.  We can stimulate the muscle to contract and measure its force in vitro.  The force data is instantaneously transmitted to a robotic limb model which exerts the same force on the substrate.  Following a small delay (<1 ms), the robot will move an amount depending on the physical resistance; slow movement for a large resistance (e.g. mud) versus fast for a small resistance (e.g. air).  The movement is measured and transmitted instantaneously back to the muscle to update its length, thus closing the loop.  Consequently, the muscle “feels” the resistance encountered by the robot as if it were directly attached.  From this technique we can measure how complex locomotor terrains influence limb kinematics and locomotor performance.

Reverse haptics: A flight simulator is an example of a haptic device where a pilot, in the real world, flies an aeroplane which is a physics simulation in the virtual world.  As the pilot moves a motorized joystick, the simulated rudder of the virtual aeroplane also moves.  Computed wind resistance on the aeroplane are then played back into the motors of the joystick allowing the pilot to “feel” the forces on the aircraft as if it were real.  In general, a biological entity in the real world (e.g. pilot) interacts with a physics simulation in the virtual world via computed forces.  In our lab, we created “reverse haptics” where the biological entity is in simulation whereas the physical forces are in the real world.  Specifically, we use a real-time multibody dynamics simulation of a biological limb.  Simulated muscles initiate movement which is mirrored exactly by a physical robotic limb.  When the robot contacts a surface in the real world it senses these forces with a load cell.  These measured forces are transmitted instantaneously back to the simulation such that the simulation “feels” the same physical forces that the robot feels.  In traditional haptics, the physics of limb interaction are computed whereas in reverse haptics, forces are measured.  This is a tremendously useful technique allowing us to understand limb-environment interactions that would be very difficult to simulate.  Using this tool we can manipulate internal musculoskeletal anatomy in software as well as alter substrate and foot/hand morphology in hardware.

Please see my google scholar profile for the most recent activity.

I teach biomechanics, animal locomotion and comparative anatomy in the BSC programme 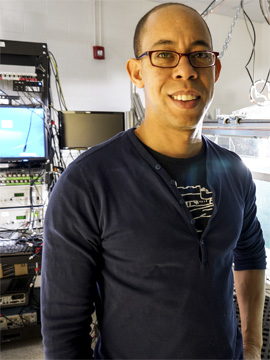