Barbara graduated from the University of Leipzig, Germany, in 2001. After completing a Doctoral Thesis at the University of Zurich, Switzerland, Barbara accepted a position as Intern in a private referral centre in Switzerland in 2004. On completion of this programme she entered the joined Residency Programme in Small Animal Internal Medicine at the University of Giessen, Germany, and the Royal Veterinary College of London and gained her Diplomate ECVIM-CA in 2008.
Prior to returning to the RVC as a Lecturer in Small Animal Medicine in December 2009 Barbara has been working as a specialist in a private referral centre in South-England.

Barbara’s main research interests include haematology, immunology, gastroenterology and selected topics in endocrinology such as hyperthyroidism and acromegaly.

Barbara has various teaching roles including undergraduate clinical rotational teaching and Senior Clinical Training Scholar supervision. She is also involved in didactic teaching of the 3rd and 4th year BVetMed students in multiple subjects, including gastroenterology, respiratory and lymphoreticular systems, and in communication skills training for 1st year BVetMed students.
As her colleagues, Barbara is involved in some RVC CPD courses, both in the form of conventional lectures and also via online courses. As a module leader she is also involved in the new Veterinary nurse graduate diploma.

Barbara enjoys all areas of clinical medicine but particularly haematology, clinical immunology, and gastroenterology. She is actively involved in our radioiodine therapy and acromegaly clinic, and is happy to discuss any possible referral cases. 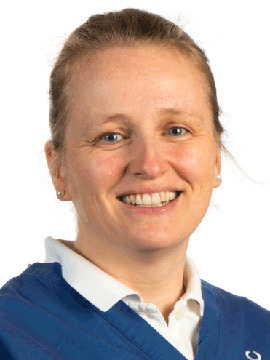