Clinicians at the Royal Veterinary College in Hertfordshire played a key role in a rare turtle’s journey to recovery, when Menai the Olive Ridley turtle visited the RVC from Anglesey Sea Zoo for a CT scan to determine the plans for her future rehabilitation and release.

Menai was found stranded on the beach at the bottom of Anglesey Sea Zoo’s drive on 12th November 2016. She is the first ever Olive Ridley turtle to be found in the UK since records began in 1748. She was in a cold-stunned state when found and was not expected to survive. Staff at Anglesey Sea Zoo believe she may have been carried as far as 15,000 miles in oceanic currents across the Atlantic Ocean. Since November, the team at Anglesey Sea Zoo have been rehabilitating Menai for eventual release back to the wild. Not only has Menai survived against all odds, but she has continued to improve and gain weight. However, Menai has been experiencing buoyancy issues, resulting in her sitting higher in the water than she should be, and preventing her from diving.

Menai is an almost full sized adult, with a shell diameter of 62 centimetres, so finding a scanner large enough for her proved a challenge for Anglesey Sea Zoo. The RVC had a scanner big enough which had previously been used for scanning turtles, and the RVC’s clinicians have experience in carrying out and interpreting these scans. When approached, the RVC were more than happy to help. 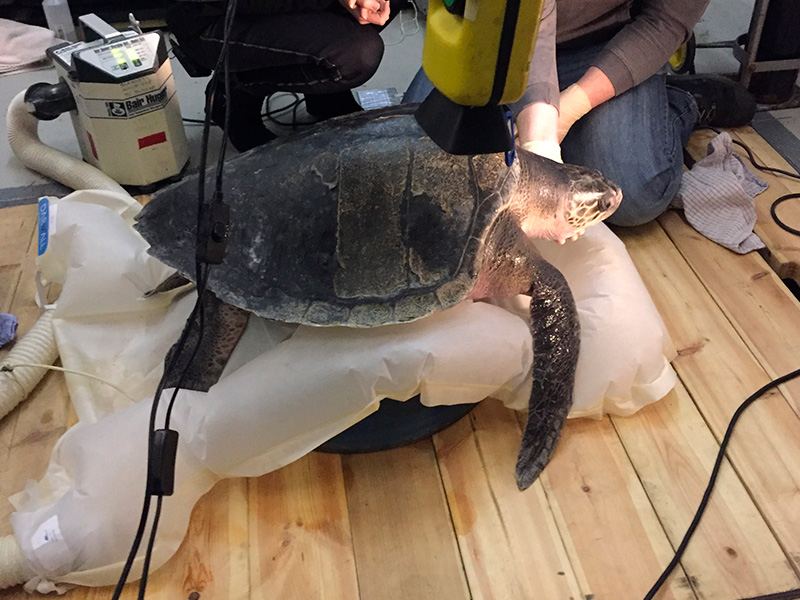 Marianna Biggi, European and RCVS Specialist in Diagnostic Imaging at RVC says: “We were excited to be approached and to have the opportunity to work with Anglesey Sea Zoo and to make a valuable contribution towards determining the future of Menai the Olive Ridley turtle, as we have carried out CT scans on sea turtles here previously. It also provides a great experience for some of our students who want to specialise in the more exotic side of veterinary medicine.”

The results from the scan confirmed that Menai the turtle has some lung damage in her left lung, which is likely to be due to a tear from over expansion of the lungs causing trauma, caused by breath holding. This has caused air to leak from her lungs into the body cavity beneath the lungs, which has resulted in her being more buoyant than she should be. It isn't clear exactly how severe the lung injury is, however, the area of the damage and how to solve the problem has now been established, which means that the long term prospect for releasing Menai is still promising. 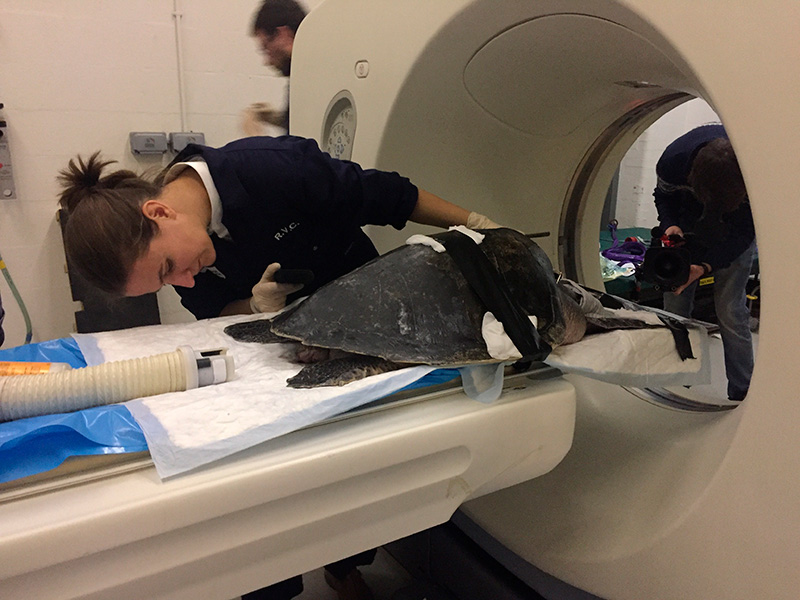 Jo Hedley, Exotic Animal Specialist at RVC, says: “Menai has been a great patient for us today. The CT scan confirms that there is damage to her left lung and that this has resulted in air escaping into the coelomic cavity making her too buoyant. At the moment we would strongly recommend that she is not flown due to the risk of damage from air pressure changes but we have recommended removal of the air from the ceolomic cavity so that the extent of the lung damage can be accurately assessed. This will give us a much better idea of whether the damage will resolve itself in time or if surgical intervention may be needed to ensure that it is permanently cured.”

Ms Frankie Hobro, Director and Owner of Anglesey Sea Zoo says: “Thank you so much to all the staff at the Royal Veterinary College in London for working with us to this ensure this important day for Menai went so smoothly. The results of the CT scan have put our minds at rest that Menai has no unexpected serious underlying medical issues and we are delighted to confirm that she appears to be in good general health other than the lung damage. We are now looking forward to planning the next steps towards her full recovery on the journey to get her returned to the wild!”

Buoyancy issues are a regular occurrence in the small number of incidents of stranded live turtles which have been successfully revived and rescued in the UK. This is caused by pockets of air trapped internally, and there are various reasons for this, the most common being over-inflation of the lungs due to infrequent breathing whilst in a comatose state, similarly to lung over-expansion injuries which can result due to breath holding whilst scuba diving. Most buoyancy issues do resolve themselves over a period of time, but everything happens slowly in reptiles so this can be a substantial period. In certain situations, trapped air can be detrimental to flying the turtle. The CT scan was therefore vital to establishing the underlying cause of her buoyancy issues, and how soon she will be able to be flown abroad for longer term rehabilitation, prior to her re-release.