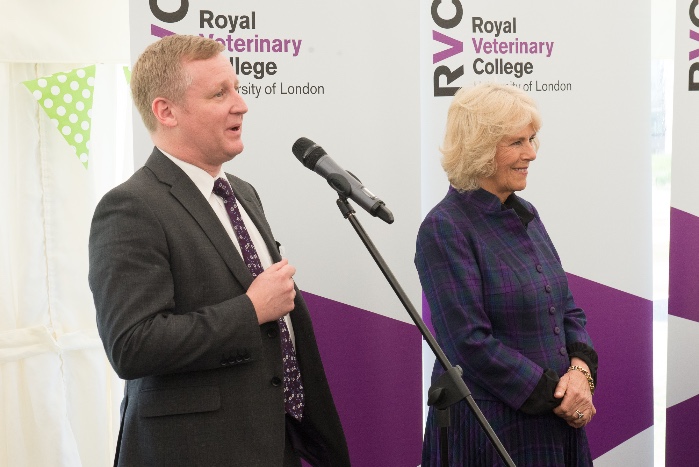 The RVC was delighted to receive a visit from Her Royal Highness The Duchess of Cornwall to mark the 30th birthday of the RVC’s Queen Mother Hospital for Animals (QMHA).

The Duchess is Patron of the RVC Animal Care Trust (ACT), which is a charitable body that raises money to support the RVC’s clinical, research and educational activities. Funds raised through the charity enabled the QMHA to be built.

During today’s visit The Duchess was given a tour of the QMHA on the RVC’s Hawkshead Campus in Hertfordshire, and met members of different clinical services within the hospital. There were a series of stopping points which focused on the key services provided at the hospital. At each point The Duchess met a lead clinician and RVC students, an owner and patient, along with the referring vet and a donor who has supported the respective areas of work.

One of the former patients was a dog called Alba. Alba had become withdrawn after a walk and developed bruising and lesions all over her body. After taking the referral, the RVC team was concerned that the Labrador puppy might be suffering from the recently-discovered New Forest Syndrome. At that point no dog diagnosed with the condition, which causes kidney failure, had survived. Specialists from the various teams the RVC has to offer agreed that plasmapheresis would be the best course of action, and they were proved correct. The removed plasma was replaced, thanks to the Blood Donor Service and Alba made a full recovery.

After the hospital tour, The Duchess visited the newly established Hamling Garden at the Hawkshead Campus which was funded by a donation to the ACT. The garden provides a quiet space for clients where they can go when they are waiting for their pets or when they need some space to make difficult decisions.

Her Royal Highness also attended a special reception to mark the hospital's 30th birthday, where she cut a cake to mark the occasion. The reception invited friends and guests who have supported the QMHA in the past.

The Duchess last visited the RVC in February 2015, when she attended the Beaumont Sainsbury Animal Hospital and other facilities on the Camden campus in London. Her last visit to the QMHA was in 2008, when she opened the latest phase of development at the site.

As part of the anniversary celebrations, the ACT has launched an appeal to raise funds to buy a new computed tomography (CT) scanner and upgrade a magnetic resonance imaging (MRI) scanner.

Facilities at the QMHA enabled by ACT donations include:

There will be a range of fundraising activities throughout 2016 and 2017, a key aspect of this being a Paw Path, which will trail through the hospital. Supporters can donate different amounts for bronze, silver, gold or platinum paws, and owners will be able to write a message for the paw to honour their pet. 2016 also marks the 225th anniversary of the RVC, which was the first veterinary school in the English-speaking world and led to the development of the veterinary profession in Britain. The QMHA, is one of the largest veterinary referral hospitals in the world, with a team of more than 200 staff.  When it was opened in 1986 by HRH the Queen Mother, there were no comparable hospitals to which the most complex cases could be referred. Since opening, the QMHA has led the way internationally by pioneering the most advanced treatments. It offers the largest and most comprehensive small animal referral service in Europe.

The QMHA, along with other RVC hospitals, provides veterinary and veterinary nursing students with a wide range of clinical training opportunities to help them become well-rounded practitioners. It is also one of the world's leading providers for advanced clinical training for vets.

Commenting on the visit from The Duchess of Cornwall, RVC Principal Professor Stuart Reid said: “On behalf of the Royal Veterinary College and especially our Animal Care Trust, I am delighted to welcome Her Royal Highness back to the Queen Mother Hospital for Animals. Over the last 30 years, our clinicians and nurses have delivered over a quarter of a million treatments to cats and dogs at the same time as advancing the science and standards of veterinary care.  Maintaining our position at the forefront of pet health is only possible with the help of our supporters, and the Animal Care Trust is central to this mission. Having our charity’s Patron here today to celebrate three decades of excellence is an honour and a privilege and we are thrilled to be able to demonstrate at first hand the important work carried out at Europe’s largest referral hospital."