Researchers at the Royal Veterinary College (RVC) and the University of Kent have developed a new cost effective approach to mapping and assembling genomes, using a novel method that is particularly effective for bird species. Developed with funding from the Biotechnology and Biological Sciences Research Council (BBSRC), this new method enables geneticists to assemble complete (chromosome-level) genome assemblies.

Genetics studies have long faced the major problem that although sequencing an animal genome is easy and cheap, assembling sequences to complete chromosomes level is difficult and expensive. Chromosome level genome assembly is much more useful to genetic science and practical application, but without significant investment, has been difficult to achieve for many species. Traditional methods of chromosome level genome assembly were time intensive and cost-inefficient in comparison to simple genome sequencing. As a result, most animal genomes that have been sequenced are not assembled to chromosomes level.

The new method developed by the RVC and University of Kent Comparative Genomics teams, and released in a new paper entitled ‘Upgrading short read animal genome assemblies to chromosome level using comparative genomics and a universal probe set’, allows geneticists to reach chromosome level genome assembly both cost-effectively and fast. The team’s specific breakthrough is to use universal probes to anchor scaffolds to chromosomes physically.

The method of using probes to map genomes has existed for a long time, but this research with contribution from the Cambridge companies Cytocell Ltd and Digital Scientific UK is the first to make a complete panel of universal probes that work equally well on any avian (and often even on reptile) genomes. This means that once DNA has been extracted from ~250 probes, these can be used as universal probes, and it is possible to apply them to any avian genome equally successfully. It then becomes an extremely cost effective way of assembling a complete genome to chromosome level, relative to designing probe libraries, choosing probes, verifying and mapping them for each genome separately. 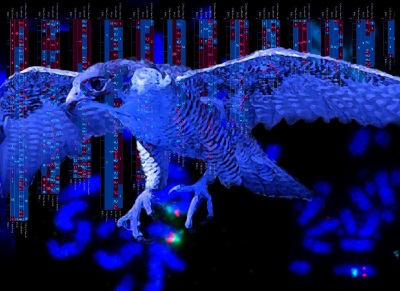 Until this study, the genomes of only three bird species had been published as assembled to complete chromosome level. Yet using this method, the research team were able to map and assemble the complete genome of pigeons and the peregrine falcon, with all other bird species also easily accessible. This new method will have significant practical implications, for example in the farming industry, as mapping the genomes of bird species such as poultry, will enable a deeper understanding of genetic characteristics. It will also enable diseases to be tackled at a genetic level.

Birds were used to develop and test this method because avian and reptilian genome sequences are more evolutionary conserved than mammals, making it easier to select universal probes. Avian genomes are also three times smaller than mammals’. However, based on the success of this method, the research team will now apply the same approach to mammals.

This research was made possible thanks to the Biotechnology and Biological Sciences Research Council (BBSRC) which invests in world class bioscience projects and research across the UK.