The cheetah has evolved to be an elite sprinting athlete and is widely acknowledged to be the fastest living land mammal. The fastest published speed is 64mph, so it could keep up with most cars on the motorway! But exactly how it achieves such a remarkable top speed is unknown.

The Structure & Motion Laboratory research team investigated the cheetah’s galloping gait.They compared it to that of the racing greyhound, a sight hound originally bred for coursing that can only achieve speeds of 38mph, despite being a similar size and morphology to the cheetah.

There is much controversy as to what limits the top speed that an animal can achieve. There are theories to suggest it is how quickly they can swing your legs (swing time), or that it is the forces that their limbs can withstand or that it is due to the amount of muscular power available (equivalent to the size of a car's engine). Perhaps it is a combination of all three. This research set out to compare the swing times and limb forces used by the cheetah and greyhound to explore these proposed limits in the fastest living land mammal.

How do you make a cheetah run?

With some chicken and a long piece of string!

The team conducted their research at ZSL Whipsnade Zoo, London and The Ann van Dyk Cheetah Centre, South Africa, where nine cheetahs where trained to chase a mechanical lure with either chicken or a tempting tape toy attached to it. Six greyhounds were brought into the Structure & Motion Laboratory by the Retired Greyhound Trust where they also chased a mechanical lure. Both species ran along a 90m track, in which an array of eight force plates were embedded, and they were filmed from both sides using four high speed video cameras.

Watch a slow motion video clip of one of the cheetahs galloping:

How can a cheetah run almost twice as fast as a greyhound?

Unfortunately in this study, the team couldn’t tempt the cheetahs to run any faster than the racing greyhounds with both species achieving top speeds of around 40 mph.  It is thought that this is due to a lack of motivation in the cheetahs rather than a lack of ability. 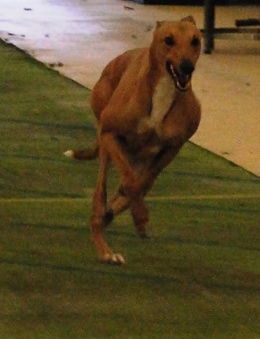 Despite this the team discovered several differences in their gallops which may account for the cheetah’s superior speed. In this study the cheetahs used low stride frequencies  at 2.4 strides per second at low speeds rising to 3.2 strides per second at high speeds. This is much lower than the greyhounds which used a constant stride frequency of 3.5 strides per second across all speeds. Despite this, the cheetahs demonstrated an ability  to increase their stride frequencies to that used by the greyhound and the team suspects that they may be able to increase their stride frequencies further. This, in combination with their longer stride lengths, may allow them to achieve their reported maximum speed of 64 mph. The team also found that both the cheetahs and greyhounds support a greater proportion of their body weight on their hindlimbs at high speed, contradicting traditional views that the forelimbs do.  This was more apparent in the cheetahs, which supported 70% of their body weight on its hindlimbs compared to 62% in the greyhounds. This will enhance the cheetah’s grip for acceleration and manoeuvring using their powerful hindlimbs.

Although there is still much work to do to unravel all the mysteries behind the cheetah’s remarkable abilities, this research has provided some valuable insights into this extraordinary animal.

For more information on this study contact Professor Alan Wilson or go to the Journal of Experimental Biology paper abstract.

This work is published in the Journal of Experimental Biology.

Read the 'Inside JEB' article by Kathryn Knight 'How cheetahs outpace greyhounds'.

The authors thank the Biotechnology and Biological Sciences Research Council (www.bbsrc.ac.uk), the Royal Veterinary College and the DARPA M3 program with Boston Dynamics (www.bostondynamics.com/) for funding the research.

Thanks to ZSL Whipsnade Zoo (www.zsl.org/zsl-whipsnade-zoo//), The Ann van Dyk Cheetah Centre (www.dewildt.co.za/) and the Retired Greyhound Trust (www.retiredgreyhounds.co.uk/) for their help in conducting this research.

Thanks to John Lowe, Karen Jespers, Kyle Roskilly, Ella Wilson and other members of the Structure & Motion Lab who assisted in this study, and to Jim Usherwood for sharing his greyhound racing data and for his input to the paper manuscript.