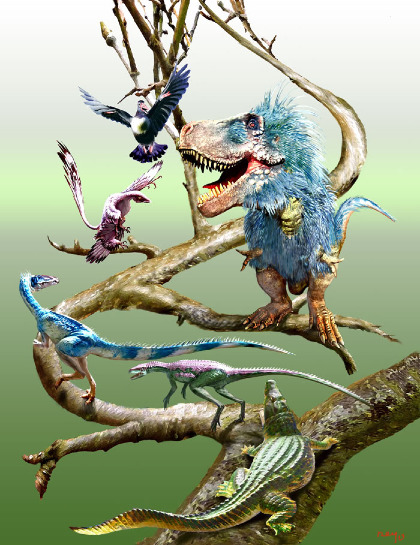 Research our team (detailed below) has published today (Wednesday 24 April 2013), in the journal Nature, used realistic three-dimensional computer models of the skeletons and bodies of dinosaurs and their relatives to show how body shape changed during dinosaur evolution and its consequences for the way dinosaurs, including their bird descendants, stood and moved.

Our study reveals for the first time that, contrary to prior studies, it was the enlargement of the forelimbs over time, rather than the shortening and lightening of the tail, that led to bipedal (two-legged) dinosaurs gradually adopting an unusually crouched posture, with the thigh (femur) held nearly horizontally – a trait that was inherited by their descendants, birds (see images below).

We used scanning or digitising technology to create 3D images of the skeletons of 17 archosaurs (land animals including living crocodiles and birds as well as extinct dinosaurs), then digitally added “flesh” around the skeletons to estimate the overall shape of the body as well as the individual body segments such as the head, forelimbs and tail.

Dr. Vivian Allen, first author on the paper, says, “We basically started from a simple digital 'shrink-wrap' of the whole skeleton. From this, we expanded the 'shrink-wrap' to match how we much flesh we think existed around the different parts of the skeleton. This was based on both detailed reconstruction of the muscular anatomy of each animal, and on what we have measured from CT scans of their living relatives. 'Accuracy' can be a misleading term in reconstructing extinct animals, but this approach gave us a repeatable and scientifically-sound estimate for the size and shape of these animals as they were in life, not just as skeletons."

Limb posture and centre of mass are linked

Prior research had shown that the first archosaurs, around 245 million years ago, were superficially like modern crocodiles - four-legged animals with long, heavy tails, although with longer limbs for living and moving on land. However, early in the evolution of the dinosaur lineage, about 235 million years ago, dinosaurs became bipedal, a trait inherited by their descendants: birds. As noted above, birds stand and walk in an unusually crouched posture, with the thigh (femur) held nearly horizontally (see Figure 1c); unlike the more vertical limbs in humans, for example.

Palaeontologists had agreed for years that this strange way of moving in birds had evolved gradually as the tail became shorter, shifting the centre of mass of certain dinosaurs progressively forward as those dinosaurs became more “bird-like”, and thereby requiring the legs to become less vertical and more crouched to keep the centre of mass balanced over the feet (see Figure 1 belo

Professor John Hutchinson, who led the study, says: “Our results surprised even us: it wasn’t primarily the shortening and lightening of the tail that drove the change in dinosaur centre of mass and thus posture, but rather the enlargement of the forelimbs. Birds (flying dinosaurs) obviously have large forelimbs for flight. But dinosaurs close to the origin of birds enlarged their forelimbs for reasons other than powered flight, such as prey capture or negotiating complex terrain. These enlarged forelimbs became noticeable in animals such as the famed feathered dinosaurs Microraptor and Velociraptor, as well as the earliest bird, Archaeopteryx

“We’d never doubted the hypothesis that the tail was responsible for the major changes in dinosaur balance and posture. The tail is the most obvious change if you look at dinosaur bodies. But as we analyzed, and re-analysed, and punishingly scrutinised our data, we gradually realized that everyone had forgotten to check what influence the forelimbs had on balance and posture, and that this influence was greater than that of the tail or other parts of the body.”

Vivian Allen adds, “We had set out to simply use modern, computer-aided techniques to illustrate how and when the centre of mass changed its position in dinosaurs, because the timing of that change had been controversial: either gradual, or more sudden and associated with the first birds and the origin of flight. We found some support for both scenarios: there were gradual changes early on in dinosaurs, but we were amazed by how much the increase in forelimb size began altering the centre of mass just before when flight may have first evolved, in early birds and their closest relatives.”

A major, unexpected implication of our discovery is that, due to the effects on centre of mass position on leg posture, forelimb size and leg function are biomechanically linked. So, these changes in the forelimb anatomy of dinosaurs, both before and after flight, also altered the way they stood, walked and ran.

Coauthor Karl Bates adds, “The evolution of birds from their dinosaurian ancestors is historically important not only to dinosaur research but also to the development of the theory of evolution itself. Way back in the 1860’s, Thomas Huxley used Mesozoic dinosaurs and modern birds as key evidence in promoting Darwin’s theory of evolution. In this study, modern digital technologies have allowed us to quantify the ‘descent with modification’ observed by Huxley all those years ago. This quantifiable evidence, derived from fossils, helps make evolution more apparent to a general audience, and helps demonstrate exactly how scientists understand what they do about evolution.”

Prof. Hutchinson concludes, “What was great about this project for us is that we were able to reconstruct the evolution of whole body dimensions in extinct animals in a quantitative way for the first time, and yet that way was honest about how much we don’t know about those dimensions. However, all that uncertainty ended up not mattering so much- there were clear patterns in changes in dinosaur body dimensions even when considering all the unknown factors. I really like the challenge of tackling such problems in science. It’s gratifying when you feel you’ve done your best to be very cautious and a cool discovery emerges from the hard work everyone put in. And anyone can join in the fun-- we’ve shared all the major methods and 3D images from our study (on the Dryad website) so others can use them for any purpose. It’s a win for dinosaur fans and scientists.”

The centre of mass of dinosaurs only tells us what the limbs had to support; in other words, what demands the body placed on them for balancing. The big missing piece of the puzzle, then, is how the muscles acted and evolved to act to support the changing centre of mass. The bones already suggest major changes in those muscles' positions, sizes and activities, as prior studies by our and other groups have shown. We are using 3D biomechanical computer models like the ones shown below (ostrich on the left, Tyrannosaurus on the right) to reconstruct how muscle support evolved in dinosaurs and what postures particular animals might have favoured, which could reveal more detail about how limb posture and locomotor behaviours evolved in dinosaurs. Watch this space!

We thank the NERC and Royal Society for funding! Other acknowledgements of individuals and museums that helped us to gather our data are in the paper.

Movie showing all of our computer models, in evolutionary sequence, from from furthest to closest in relationship to living birds: