Information about the paper in Nature by John R. Hutchinson and Stephen M. Gatesy

What the paper DOES say

What the paper DOES NOT say

See also Tyrannosaurus was not a fast runner.

Scientific theory combines with Hollywood wizardry to bring dinosaurs to life in a News and Views feature in the 16 March 2006 edition of Nature. In films, dinosaur locomotion is a result of clever software and the artistic interpretation of special effects departments. Now scientists are using improved software tools that have a firm grounding in physical principles, rather than artistic intuition, to test their own hypotheses on how dinosaurs walked the Earth.

John Hutchinson and Stephen Gatesy present a Tyrannosaurus rex case study of how to use modern computer tools to reconstruct dinosaur movement. They focus on the problems of determining the position of the limbs - its pose - at specific instants during a stride. By using combinations of motion-based and force-based criteria, the authors are able to filter out unlikely or impossible poses and establish a motion 'starting point'. The authors demonstrate the powers of computer simulation when combined with sound scientific theory and propose its application to factors, such as feeding, in other extinct animals. They highlight the need of palaeontologists to become better functional biologists to ensure that questions on popular science don't overtake basic evidence.

John writes:
I was trained as a biologist (B.S., University of Wisconsin, 1993) and specialized in the evolution of dinosaur anatomy and locomotion (Ph.D., University of California, 2001). During this time I was a visiting scholar with coauthor Steve Gatesy at Brown University for one semester, from which several collaborations such as this one have sprung. Later I added new skills from biomechanics during a National Science Foundation postdoctoral fellowship at Stanford University from 2001-2003. Now I am based in the London, UK area, where I use anatomical, modelling/simulation, and experimental techniques to study the locomotion of extant and extinct animals such as dinosaurs (including their avian descendants), crocodilians, elephants, and rhinoceroses. One of my goals is drawing the fields of biomechanics and evolution closer together. My research focuses on the evolution of locomotion in terrestrial vertebrates and the relationship between size, anatomy, and locomotor biomechanics. 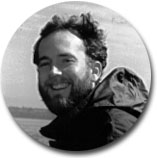 Steve writes:
My background is in biology, paleontology, and art. I was a biology major and geology minor at Colgate University (B.A., 1983) before using x-ray and muscle activity studies of living alligators and birds to explore the evolution of hind limb function in theropod dinosaurs at Harvard University (Ph.D., 1989). I received further training in nerve-muscle development at Emory University, bird flight at the University of Montana, and avian embryology at Harvard before joining the faculty at Wake Forest University for two years. Since 1995 I have been a professor at Brown University, where I teach human anatomy to first year medical students. Over the last decade my research has used high-end 3-D animation tools (Alias Studio, Autodesk Maya) to reconstruct dinosaur foot movements based on 210 million year old tracks from Greenland, to measure the complex motion of a bird’s skeleton in flight, and to find new ways to study locomotor evolution. Like John, I strive to be a bridge between biologists exclusively studying living animals and paleontologists working solely with fossils.

Is your method new?

Not really. It is a change of perspective mostly, but we argue it is an important one. The motion and force-based criteria we use are drawn directly from well-established 'rules' of how living animals move.

What software tools did you develop/use?

We used Autodesk (Alias) Maya, a very popular animation program. However instead of doing animations intuitively, we quantified physics-based parameters inside of and outside of the software, to apply the criteria for excluding poses.

How many motions remain after you excluded some as unfeasible?

We don't know. Thousands probably. But our paper was more about which methods we should use and how, than about obtaining specific results. We have just begun this research.

What do you expect to find?

We'll never know exactly how any one dinosaur moved. We should be able to narrow down the potential motions considerably, but it is almost certain that a 'cluster' of motions will remain. The most extreme reaches of those clusters will probably be motions that are obviously different even to a casual observer.

Could you use simulation techniques such as genetic algorithms to animate dinosaur locomotion?

In our opinion, yes and no. These interesting techniques can determine what the best movement strategy would be in order to achieve certain goals such as run at maximal speed, walk economically, and so on, given a set of assumptions about body dimensions, muscle anatomy and physiology, motor control, etc. However we remain skeptical about these techniques applied to dinosaurs. Exactly what goal animals seek to optimize when moving remains uncertain in many cases, and critical validation of simulation techniques with living animals so far is lacking in most cases. Again dinosaur science depends on discoveries made from the study of living animals.

However this approach will have more promise once its limitations and reliability are better known, perhaps in synergy with the constraint and exclusionary approach we outline in the paper. Nonetheless, the criticial problem is the assumptions entered into any model or simulation. We will never know the body dimensions, muscle physiology, and other parameters for extinct dinosaurs, so careful sensitivity analysis (varying the values of these parameters within a reasonable range) is absolutely essential. Frustrating as it may be, this would produce a range of movement patterns, not a single optimum. Hence we expect that we still will never have one simple answer for how dinosaurs moved.

Graphics from the paper (all are copyright 2006, the authors) 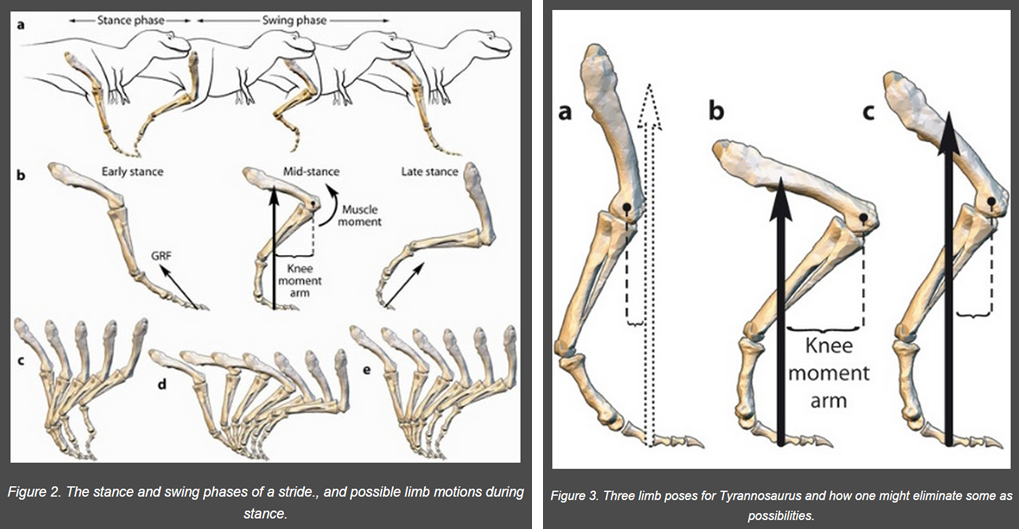 (First two are Supplementary Information for the Nature paper; others are extras for additional explanation of the concepts in the paper)

Fast-walking Tyrannosaurus (MOV)A hypothetical animation of fast walking in Tyrannosaurus, created by animator Scott Harris under our consultation. This was based only on qualitative scientific intuition -- we required a relatively straight limb, flexible foot motion, timings of joint motions that match those of extant animals such as crocodilians and birds, and other criteria.

Running Tyrannosaurus (MOV)Three different hypothetical strides for a running Tyrannosaurus at 10 meters/second (22 mph; 36 kph). None can be ruled out immediately, and thousands more different strides exist in the space of kinematic possibilities. It is still possible that none of these strides would be feasible at this or any other speed; they are here for illustrative purposes, not to show how we think Tyrannosaurus might have really moved.

These show the same poses for a running Tyrannosaurus, but displayed at different frame rates to emphasize how we don't know an important time-dependant parameter: the stride frequency.

10 meters/second (MOV) (as Running Tyrannosaurus above)

News coverage of this research