“DAWNDINOS” is a five year research project studying the dawn of the age of the dinosaurs, funded by the European Research Council via an Advanced Investigator Grant to Professor Hutchinson.  It focusses on form and function and combines evolutionary and biomechanical research that tests how the anatomy of extinct dinosaurs and their relatives (archosaurs; “ruling reptiles”) was related to their movement and behaviour. The “DAWNDINOS” website gives further details about the project in addition to the information below.

What is the Locomotor Superiority Hypothesis?

We are testing the “locomotor superiority hypothesis” (which has not been fully tested before) that early, bipedal dinosaurs evolved advantages in their locomotor performance over other Late Triassic archosaurs to see if this explains why dinosaurs succeeded across the Triassic-Jurassic transition and why the crocodile-lineage did not enjoy the same success on land.

This hypothesis was first proposed over 40 years ago to explain what made dinosaurs distinct from other Triassic species, perhaps aiding their survival into the Jurassic period. However, the hypothesis remains controversial. We are testing this question as directly as is feasible, but first we are focusing on developing the best tools to do so.

The DAWNDINOS research team will test this hypothesis first by studying five locomotor behaviours: walking, running, turning, standing and jumping in living birds (descendants of Triassic dinosaurs) and living crocodiles (descendants of Triassic crocodiles). The team will then use computer simulations of extinct dinosaurs and other archosaurs, informed by those studies of living archosaurs, to test how well they might have performed these behaviours, testing if the locomotor superiority hypothesis is plausible (or not).

Extant archosaurs; Nile crocodiles (Crocodylus niloticus) and tinamou birds (Eudromia elegans); have allowed us to experimentally measure key factors (such as 3D skeletal motions and limb forces) involved in the five behaviours. We are now using biomechanical computer simulations to estimate how these behaviours were achieved, or whether more extreme behaviours (e.g. faster speeds) might still have been feasible but not observed. This will refine our simulations by testing major assumptions, and will validate them for studying extinct archosaurs.

These simulation tools will be used to predict how eleven Triassic/early Jurassic archosaurs may have moved, and to compare how their performance in the five behaviours related to locomotor traits, testing if the results fit expected patterns for “locomotor superiority.”

Our research team has completed the experimental studies using cutting edge XROMM (X - Ray Reconstruction of Moving Morphology), force platform and EMG (electromyography) techniques, and is now analysing the data collected. In our future research on this project, we expect to resolve how Nile crocodiles and tinamou birds move by predicting (in simulations) how their muscles are turned on and off to generate certain behaviours, and comparing these predicted behaviours against experimentally measured ones. This “validation” procedure will be crucial for our simulations of extinct archosaurs, which themselves are needed to directly address the locomotor superiority hypothesis for dinosaurs.

We have also collected 3D digital scans of the skeletons of numerous fossil archosaurs for our modelling and simulation studies. We completed an initial study of the biomechanics of the forelimbs in the dinosaur Mussaurus, which was closely related to the giant sauropod dinosaurs but was still of moderate size. Our modelling analysis showed that, at least as an adult, it was unlikely to have been able to plant its forelimbs on the ground in order to move quadrupedally, so it must have retained the bipedal locomotion inherited from earlier dinosaurs.

Our palaeontological research is moving forward as well - for example, we have assembled a 3D model of the skeleton of the early crocodile-relative Batrachotomus to test whether it was quadrupedal (as most prior studies concluded) or bipedal (as some later members of its group such as Poposaurus were).

While much recent focus has been on how birds evolved from non-avian dinosaurs and why the latter group went extinct at the end of the Cretaceous period, the early history of dinosaurs and their kin remains unclear. Yet the fossil record from this time is wonderful and quickly improving, so there is untapped potential for addressing major questions about the dawn of the dinosaurs, such as the locomotor superiority hypothesis we are looking at in this study.

This study pushes the frontiers of experimental and computational analysis of movement by combining the best measurements of performance with the best digital tools, to predict how form and function are coordinated to achieve athletic behaviours in a given species. Our integrative analyses will move the field of evolutionary biomechanics forward. It will also advance the usage of computer simulation methods for estimating behaviours and linking form with function in the musculoskeletal systems of organisms. This advancement will build confidence in and spread adoption of these methods, ultimately enhancing our understanding of how animals work (even leading to applications such as clinical improvements or robotics/artificial intelligence) as well as furthering the replacement of experimental methods with digital simulations where appropriate.

Further information about the project can be found on the project website www.dawndinos.com (including new artwork by top palaeo-artists).

Dinosaurs fascinate scientists and the public alike and science engagement is an important part of this project. We have already conducted a number DAWNDINOS outreach efforts at local schools and other events and are planning more. For further information contact lkermode@rvc.ac.uk. 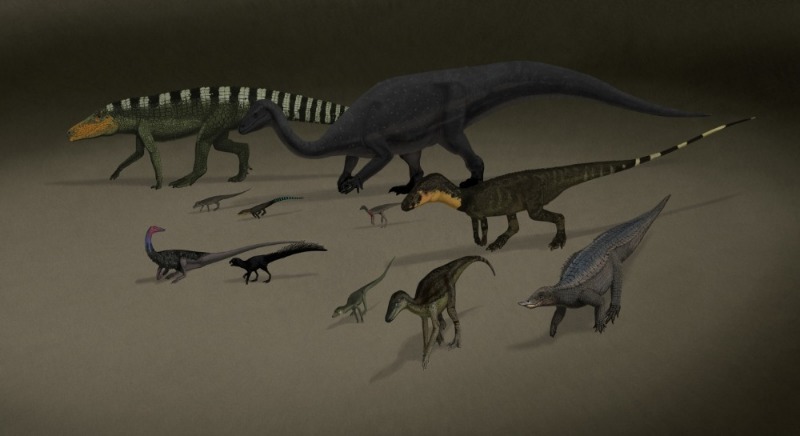