Have you ever watched cows walking? They loll about, lurch, stagger and meander from place to place. This makes it difficult to identify when a cow is showing signs of lameness – the changes in gait that happen when weight-bearing is painful – until the lameness is severe.

The high cost of lameness

Sore feet and other causes of lameness affect up to 50% of dairy cows each year. Lameness causes pain to the cows and they produce less milk and are less fertile.Once they have been lame, they are more likely to become lame again in future. Lameness can be very difficult to treat and costs farmers and the dairy industry a great deal of money each year. The earlier lameness is treated, the better the outcome for the cow and the farmer.

Every cow has its own normal walking pattern. When it becomes lame, there are subtle changes in the way it walks: it could put the sore foot down more slowly or put less weight on that foot or pick that foot up more quickly than usual. A system which could automatically detect early signs of lameness from changes in an individual cow's normal gait pattern and alert the herdsman would be a huge benefit to dairy farmers.

The SML team has used force plates (plates containing sensors which measure a range of forces when an animal walks across them) to analyse the gait of other species. With support and funding from DEFRA, we decided to try to find out whether we could develop a system using force plates to detect early signs of lameness automatically.

Over a two year period data was collected automatically from a series of force plates at the exit from a milking parlour. This provided data on over 500,000 individual foot-strikes from which a wealth of information could be extracted.

Each foot strike provided a number of features including location, vertical force, horizontal force (right/left and forward/backward) time, duration and time taken to reach a peak (important as pain might induce a cow to place a foot more cautiously). Using the automatic system, we were also able to exclude data which was potentially less useful, for instance cows which did not walk steadily across all five plates or which did not walk squarely on individual plates. A total of 67,000 foot strikes were thus extracted from the original 500,000.

Each foot strike provided a number of features including location, vertical force, horizontal force (right/left and forward/backward) time, duration and time taken to reach a peak (important as pain might induce a cow to place a foot more cautiously). Using the automatic system, we were also able to exclude data which was potentially less useful, for instance cows which did not walk steadily across all five plates or which did not walk squarely on individual plates. A total of 67,000 foot strikes were thus extracted from the original 500,000.

Additionally, we were able to extract secondary data from these primary values such as the weight of the animal (important to normalise data between animals) and whether it was moving at a constant speed (necessary to discriminate lameness).

In order to evaluate the effectiveness of the automatic system, we needed to be able to assess lameness in a conventional way as a control. Skilled operators assessed lameness visually and assigned a score according to the five point Manson and Leaver lameness scale. After testing the repeatability of scores gained with this system, both between operators and between the same operator on different occasions (using video records), we were able to gain greater reliability through reducing the number of points on the Manson and Leaver. Lameness at different Manson and Leaver scores could then be plotted against the data obtained from the foot strike. 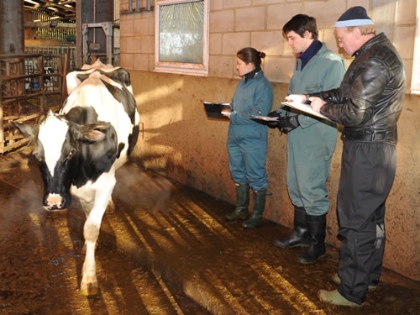 On plotting the various features against visually established lameness, wide variations in gait became apparent from cow to cow. No single feature was discriminatory for lameness. However, using advanced statistical techniques, we were able to establish a group of features which, in combination, was a useful discriminator for lameness. Significantly, these included many features which were unrelated to vertical force.

Because the automatic system allowed us to follow individual cows, we found that when a cow operated as its own control (moving from soundness to lameness or vice versa) a very much simpler set of features were discriminatory for lameness. These used parameters related to vertical force alone and demonstrated a shift in weight distribution between front and hind legs associated with lameness. An important feature of these latter findings is the fact that equipment to measure vertical forces alone would be significantly cheaper.

There were many practical problems to overcome in using sensitive electronics and computers in the harsh conditions of the milking parlour, with twice daily jet washing, disinfectants and other farmyard by-products …. ! The cows often didn’t walk at a steady pace, which affected the data just as much as lameness might. We tried the system at different farms. Ensuring all the equipment was spotlessly clean to avoid any biosecurity issues was a major task. Over time we overcame the problems and learned a great deal which will contribute to future development of the system.

Despite the complexity of the challenge and the practical problems, we believe that we have achieved proof of concept for using force plate analysis for automatic early detection of lameness in dairy cattle.

Further development work on the system using data collected from more cows and different parlour setups will be needed to validate these early results. This would allow us to simplify and further define the feature changes in gait which are diagnostic of early lameness and to develop a system which would be affordable and reliable for farmers.

For more information about this project, contact Dr Thilo Pfau

Our thanks to the farms who allowed us access to their milking parlours and herds, especially Boltons Park Farm and Lee Valley Farm.

We acknowledge the generous support of DEFRA for funding this work.