Our team of three scientists consists of Dr. Stephanie Pierce (now RVC alumni), Professor Jenny Clack (Cambridge), and Professor John Hutchinson (RVC). We have been funded by the NERC for the past three years (2009-2012) to construct the first 3D computer models of the earliest bony animals with four limbs (tetrapod vertebrates) that potentially moved on land. On 23 May, 2012 we published a paper online in Nature in which we present results for the iconic tetrapod called Ichthyostega, which has featured prominently in studies of how vertebrates conquered land for over 50 years. This animal is represented by over 300 isolated specimens (see Images and Videos tab), many of which we have studied, enabling us to scale and combine them (predominately using the single best-preserved skeleton, which is affectionately known as 'Mr. Magic') into a 3D model, shown below. 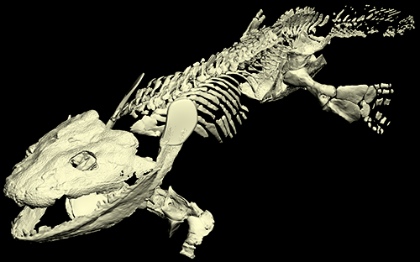 We took microcomputer tomography or µCT scan reconstructions of each bone in the skeleton of Ichthyostegaand articulated them in 3D using commercial software (3D Studio Max and SIMM). By manipulating the 3D model we were able to test how the limbs of Ichthyostega could, or could not, have moved in life. Specifically, we estimated the range of motion (links here and here) in each of the major limb joints (shoulder, elbow, hip, knee). The wrist/ankle and fingers/toes were not dealt with in any numerical detail because they have less of an impact on how the whole limb moves, are not preserved (e.g. forefoot or hand) or seem to have had little motion (ankle). Our estimates were made by moving the joints in controlled planes and visually inspecting each limb pose that was allowed or prohibited by the joints.

To examine how reliable our model was in predicting limb movement, we built similar skeleton-only models of five modern animals with at least vague resemblances to Ichthyostega, including a crocodile and seal. We then compared the skeleton-only ranges of motion to those in cadaveric (dead) animal limbs to ensure our measurements were realistic. This test showed that our computer models always tended to overestimate the ranges of motion, indicating that soft tissues, such as restraining ligaments and bulky muscles, would only decrease the mobility of the joints. As such, our 3D modelling technique tended to over-estimate the range of motion of joints, which ended up being a bias that fortunately strengthened our conclusions.

Our analysis found that Ichthyostega, as compared to modern land animals, did not have much mobility in its shoulder and hip joints, especially for rotating the limbs around their long axis. (Try rotating your whole arm from palm-side up to palm-side down, this is long-axis rotation) Such rotation is important in the movements of essentially all land animals today, and particularly so in animals with more primitive limb motions such as salamanders, lizards and crocodiles. Because we learned from our validation study that the addition of soft tissue would have restricted movement even further, thus relying on bones alone over-estimated joint ranges of motion, we could strongly infer that Ichthyostega could not have moved in ways very similar to living land animals. In addition, we found that the hip anatomy in Ichthyostega would have prevented the hind feet from making firm contact with the ground - meaning it could not have supported its body weight on all four legs or moved like a salamander, as it had previously been reconstructed for many decades.

Detailed comparison of limb mobility in Ichthyostega with those of modern animals found that its limb movement - and locomotion behaviour - was most similar to that of a mudskipper fish. Mudskippers are decent swimmers but also can move about temporarily on land (video) using synchronous forelimb “crutching” motions - supporting the body on a sort of tripod with the two mobile fins at the front and the tail plus hind fins in back. The limbs of Ichthyostegaprobably would have behaved in a similar way, i.e. the forelimbs would have pushed the body up and forward while the hindlimbs and tail trailed behind. Perhaps this type of locomotor behaviour (and restricted limb mobility) in the earliest limbed animals helped to stabilise the body during their first tentative 'steps' onto land.

These possible motions give us a search image for the kinds of tracks that early tetrapods - with a similar skeletal anatomy to Ichthyostega - might have made. Indeed, fossilised tracks with at least some of these features, made either on land or in shallow water, are known from Ireland, Poland and other areas. However, some other tracks known from the same areas do not match these predicted footprints—so what animals made these? We cannot say, but at least now the fossil skeleton and footprint record have some degree of concordance that future studies are likely to improve.

We are now working on investigating how the vertebral column (spine) of Ichthyostega and its relatives was constructed and how it might have moved, and what this means for how early vertebrates first locomoted on land and how walking (and running?) may have first evolved. Stay tuned!

We thank the NERC for funding!

On the evolution of locomotion:

Our 3D model of Ichthyostega:

Movie of maximal forelimb ranges of motion in Ichthyostega:

Movie of maximal hindlimb ranges of motion in Ichthyostega: