Dr. John Hutchinson’s team in the Structure & Motion Laboratory group (PhD student/Scientific Illustrator Julia Molnar and Dr. Vivian Allen), along with Dr. Karl Bates from the University of Liverpool, and Dr. Peter Makovicky from the Field Museum in Chicago (USA), have shown in novel detail how the entire body of the famous carnivorous dinosaur T. rex changed during growth, and the consequences of that growth for its behaviour. To do this, they used three-dimensional (3D) computer models (see image below and our images page) based on high-resolution scans of the whole skeletons. Their research has been published in the online journal PLoS One (click here), and was partly funded by the Natural Environment Research Council (NERC) in the UK, and the Field Museum in Chicago. A summary of the paper follows.

How did T. rex grow?

Previous studies of Tyrannosaur growth have been mostly qualitative speculations or focused on simple measurements such as bone lengths, diameters. But that all changed with the discovery of a juvenile (about 12 years old) skeleton nicknamed "Jane" (from the Burpee Museum of Natural History), which the Hutchinson et al. study estimates as having a mass of 600-1200 kg. This enabled the new study to compare Jane to other, adult or near-adult, skeletons including four of the best-preserved ones (49-75% complete, and the original Carnegie Museum of Natural History skeleton at 11% complete but featuring many of the largest bones; recent story here). They could thereby estimate how Tyrannosaurus grew during what was previously established to be its juvenile "growth spurt."

What they found was impressive - using a methodology that the authors (especially Hutchinson, Bates and Allen) had established in their previous studies, they showed how T. rex was bigger than generally thought. The adults all, at their skinniest, were easily 6 metric tons (not the 3-5 tonnes often favoured by palaeontologists), but the large Sue specimen was possibly up to 9500 kilograms; about 30% bigger than anticipated. A novel aspect of their study is that they produced a wide range of reconstructions for T. rex, acknowledging that its real-life dimensions are unknown and inaccurately estimated.

But even with this uncertainty, it was bigger than some researchers had taken into account. A bigger adult had to grow faster during its teenage years, so their revised estimates of its growth rates came out as up to twice as fast as previously estimated. At its fastest, a Tyrannosaurus might have grown as quickly as 1790 kg per year-- that's like putting on about 11 pounds (5kg) per day! A lot of duckbill dinosaurs would have been needed as food to fuel this.

As a T. rex grew, the study shows that its head and torso got larger, while the limbs became relatively shorter (but to some degree, bulkier). Thus even a teenage Tyrannosaur and an adult Tyrannosaur would have looked rather different in their body proportions (see image above). This change had consequences for the way it would have stood and moved.

How did locomotion change during growth?

Hutchinson and colleagues developed a new method, similar to that published recently, for reconstructing the huge tail-based leg muscle called the caudofemoralis longus in T. rex (see image above; muscle in red). They used comparisons with living animals as well as skeletal landmarks and bone scarring to do this 3D modelling and found it was about 96% accurate when applied to a crocodile of known muscle mass. When applied to T. rex specimens, this showed that the muscle probably became relatively smaller as the dinosaur grew - not larger, as the previous study had suggested. Because this muscle would have been an important power source for locomotion, the researchers concluded that Tyrannosaurs must have slowed as they grew.

This conclusion became reinforced as the scientists looked more broadly at T. rex's body and limb muscles. They estimated the entire leg muscle mass of each specimen, again using the skeleton and living animals as a guide, and found the same thing as for the caudofemoralis- the leg muscles seemed to all get relatively smaller (with a hefty margin of error) during growth. Yet even with this change, the supportive leg muscles of a big tyrannosaur would have been some of the largest of any known land animal (especially in relative terms)-- perhaps as much as 15-25% of its body mass per hindleg! That's larger than in any large mammals (7-11%), but mostly concentrated around the hips, in the form of that big caudofemoralis muscle.

Furthermore, the way a T. rex's body proportions changed during growth would have affected its motions. It became more front-heavy as the head and torso expanded, which shifted its center of gravity forward and thus required more force from the leg muscles to hold it steady (picture leaning over more while holding a heavier weight).

Together, these changes of leg muscle bulk and center of gravity would have made rapid locomotion more difficult for an adult T. rex. Whether they slowed down in absolute terms (mph or kph), or just relative terms (e.g. body lengths/second) is uncertain, but the youngsters would have appeared markedly more sprightly and agile than the adults. This is true of most land animals, but would have particularly applied to two-legged, fast-growing Tyrannosaurs. For more about their locomotion, see Dinosaur locomotion: beyond the bones and Tyrannosaurus was not a fast runner.

Note: Tyrannosaurus rex is properly abbreviated as T. rex (and if you're truly accurate, italicized!), not T-rex, T-Rex, T. Rex or otherwise. Biologists are precise about formatting of names- we're not H-Sapiens but Homo (H.) sapiens.

ALL GRAPHICS/ MOVIES WERE GENERATED BY CO-AUTHOR JULIA MOLNAR. TO INQUIRE ABOUT USE AND DISTRIBUTION, PLEASE WRITE TO: jhutchinson@rvc.ac.uk 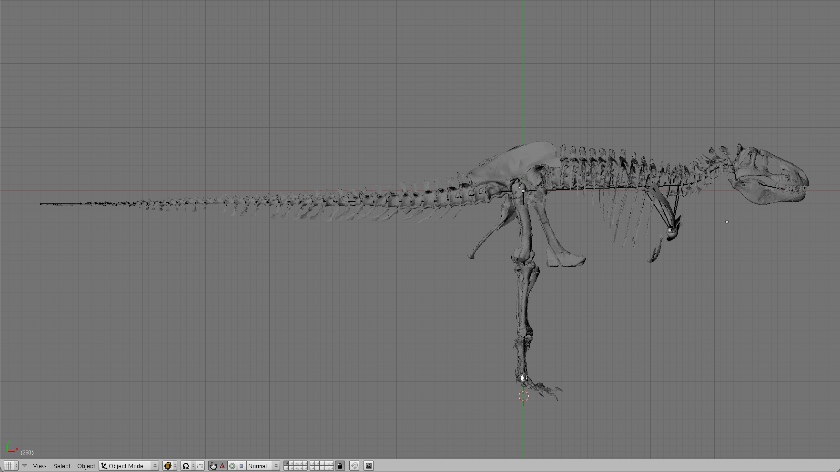