Whilst bone calcification is an essential part of a functioning skeletal system, soft tissue calcification can have numerous negative physiological effects.

Consequently, there are mechanisms in place to prevent soft tissues from calcifying. When these regulatory processes fail unwanted mineral deposition can occur, a good example being vascular calcification. Vascular calcification is the formation of bone-like deposits within blood vessels, heart valves and cardiac muscle and is a significant risk factor for future adverse cardiovascular events such as heart attack and stroke.

Recent research has shown that there are some outward similarities between bone formation and vascular calcification. Despite recent advances in understanding, there are still no effective treatments to prevent or treat this condition. Using the expertise at the RVC in both skeletal and cardiovascular biology we have been using mouse models to understand how vascular calcification develops and to identify signalling pathways that could represent novel pharmacological targets. Specifically, we are using genetically altered mouse models which lack specific proteins (termed a “knockout”) important in preventing non-specific calcification. These animals display calcification of the aorta and other soft tissues as well as significant changes in their bone mass. Isolating vascular tissue and cells from these animals allows us to investigate how alterations in these signalling pathways lead to vascular calcification.

Studying the bone cells from these animals also allows us to fully understand the similarities and differences between bone formation and vascular calcification. This is particularly important because, given the outward similarities between the two processes, the possibility remains that a therapeutic agent which treats vascular calcification could cause bone loss. The movement, food intake and weight of all knockout animals is carefully monitored to ensure they are not suffering as a result of the genetic changes. 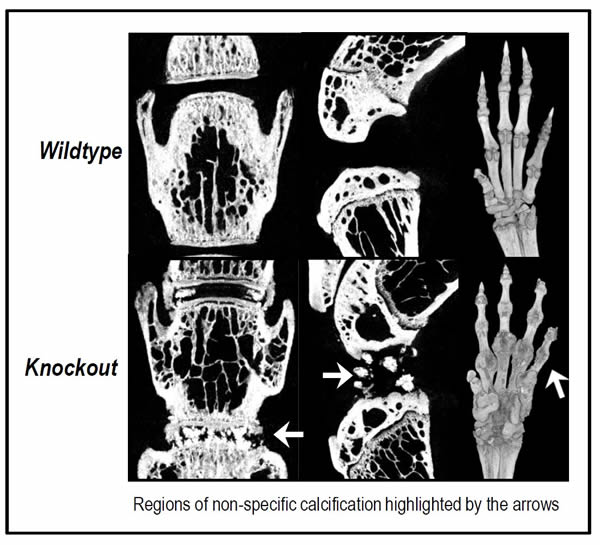