Whilst there are a number of disease processes that affect the canine heart, mitral valve disease (MVD) is by far the most common. 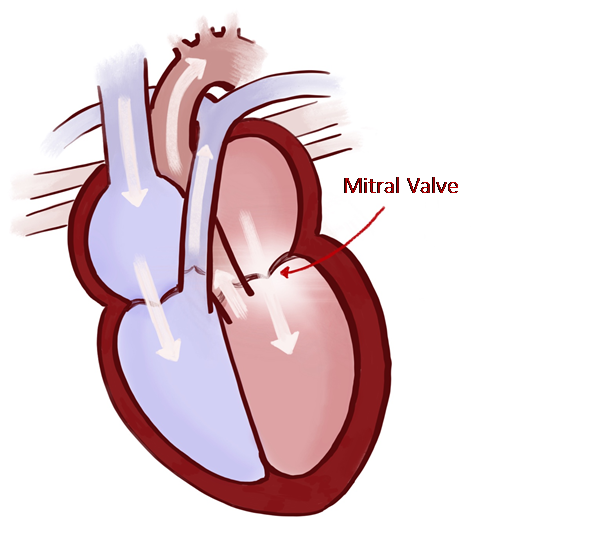 When dogs are affected by MVD, for reasons that are not fully understood, the valve tissue degenerates, becoming distorted and unable to fully close. Functionally, this means that when the left ventricle contracts, some blood leaks through the misshapen valve, moving backwards into the left atrium. This leak causes an audible murmur, which can be detected by listening to the heart with a stethoscope as part of a clinical examination.

MVD is a progressive disease and gets worse with time, however the rate at which the disease advances varies a lot between individuals. In a majority of dogs this rate is slow and not all individuals will develop symptoms within their lifespan. In cases where the disease does progress, MVD may bring about secondary changes to the shape, size and function of the heart. Dogs with advancing disease may go on to develop congestive heart failure, showing symptoms such as an increased respiratory rate when resting, breathlessness, coughing and a reduced tolerance for exercise. Dogs that are in congestive heart failure are very likely to die as a result of their heart condition.

The Mitral Valve Clinic (MVC), run by the Royal Veterinary College (RVC), is a research clinic that has been collecting data from a population of dogs with MVD since 2004. To date, over 450 dogs have been seen at the MVC. By recording information from lots of patients over a long period of time, the team of researchers working at the MVC have advanced the understanding of MVD in the dog and will continue to do so.

Dogs are enrolled in the clinic population on a voluntary basis and are examined every 6 months at no cost to the client. At each examination, dogs only undergo diagnostic tests that are routinely used by veterinary cardiologists to monitor MVD. These include: a physical examination, blood testing, urine testing, blood pressure monitoring, an electrocardiogram (ECG) and a cardiac ultrasound scan (echocardiography). All examinations are conducted without sedation or anaesthesia. As well as contributing to research, the results of these diagnostic tests are useful as they provide the client and their pet’s primary veterinary surgeon with information about their pet’s general health and disease status.

The data produced by the MVC have already been used to produce numerous publications on this topic, and resulted in the award of three PhDs. Research conducted by members of the clinic has been used to advance our understanding of:

In the early stages of MVD, prior to the onset of heart failure, a cardiac ultrasound scan is required to confirm a diagnosis of MVD. In these asymptomatic dogs, evidence of an increased heart size on the cardiac ultrasound scan is interpreted as a sign that their MVD is more advanced and used as the basis of therapeutic decision making. When ultrasound measurements exceed certain limits, affected dogs are now routinely treated with a drug called pimobendan. When given daily, this treatment is associated with a reduction in the risk of developing congestive heart failure. Chronic treatment with pimobendan has been shown to delay the onset of congestive heart failure, extending the amount of time that a dog lives without the symptoms of disease.

In first opinion practice, asymptomatic dogs often need to be referred to a cardiac specialist in order to ensure that accurate ultrasound measurements are obtained. This can prove restrictive, as many dogs are unable to undergo the recommended tests due to financial, travel or temperament-based limitations. In turn, this means that a population of dogs may not be prescribed therapy that has the potential to improve their lives. In order to best apply our knowledge of treating asymptomatic MVD, it is therefore necessary to explore alternative techniques that could be used to identify patients more likely to have advanced disease.

The HAMLET study aims to address this objective by evaluating whether levels of serum cardiac biomarkers, interpreted alongside a patient’s clinical information, can determine which dogs are likely to have cardiac enlargement and therefore would benefit from further investigation or treatment. The study is a prospective, multicentre, cross-sectional study led by primary investigators at the RVC. Data required for the HAMLET study are recorded from the standard clinical procedures used to evaluate asymptomatic MVD and submitted by participating veterinary cardiologists in the UK and Germany. HAMLET was launched in March 2018 and is currently ongoing.

Both the Mitral Valve Clinic and the HAMLET study have been undertaken in accordance with CRERB guidelines and have received ethical approval from the Royal Veterinary College Ethics and Welfare Committee.