Muscular dystrophy is a general term encompassing a variety of inherited diseases that affect the muscles of mammals. Of these, Duchenne Muscular Dystrophy (DMD) is the most common. Indeed, it is the most common fatal human genetic disorder diagnosed in childhood.

DMD is also fatal in dogs and every year, veterinary patients are diagnosed with the condition at the RVC. Affected dogs and humans have a defect in the gene for the protein dystrophin, which has a structural role in muscle: as a result, patients lose mobility, becoming progressively weaker until the muscles required for heart function and breathing become compromised. Because the gene is located on the X chromosome, females carry the mutant gene but typically remain unaffected, whereas males are affected by the disease. Human patients with DMD experience the same pattern of progressive muscle weakening as dogs and the two species share common signs. These include difficulty walking, generalised muscle loss and weakness. Three decades ago, affected boys typically died by age 16, suffocating to death over the last six months of their lives as a result of severe weakness of muscles required for breathing, including the diaphragm. 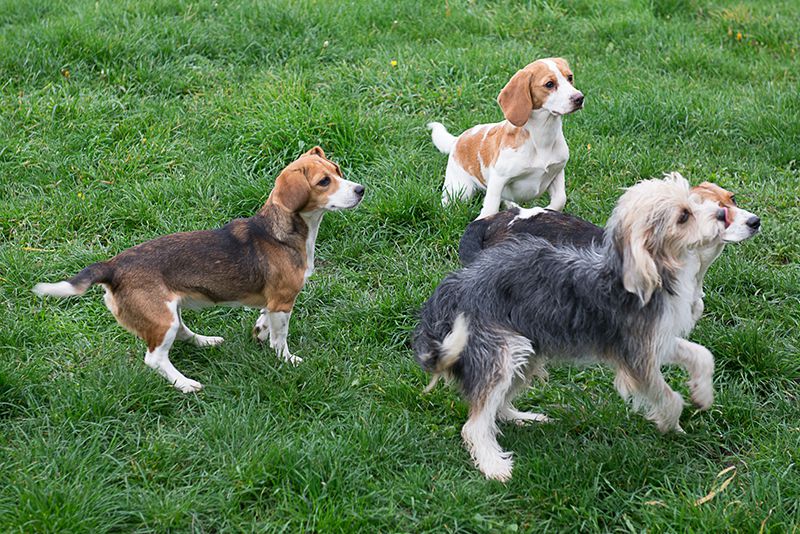 Over recent decades there has been some improvement, with steroid medications helping slow degeneration and assisted ventilation equipment helping with breathing. However, human patients are still generally in wheelchairs by age 13, unable to care for themselves by their mid-20s and die by their early 30s. A treatment to arrest the progression of the disease, in particular to stop the rate of muscle wastage, would allow sufferers to maintain their independence without developing the debilitating signs. New treatments, following neonatal screening, could mean patients are treated before symptoms develop, improving the quality and length of life of those affected.

Ultimately, treatments designed to correct the faulty gene could be curative. Whilst some testing is performed in affected human patients, major developments and experimental drugs, require experimental animals with the equivalent disorder. Whilst mice with the disorder are useful for initial tests of potential therapies, they do not display overt signs of the disease (making it much more difficult to determine the effect of treatment with tests that can also be used in humans). Dogs are better research subjects when examining treatments for improved muscle function than mice because they do display signs of the disease that are similar to those in boys.

As dogs are larger than mice, the clinical signs, such as muscle wastage, walking more slowly, abnormal gait and not walking as far as previously, are much more noticeable. Several years ago, the RVC identified a naturally-occurring mutation in the dystrophin gene in a dog brought to the RVC’s Small Animal Referral Hospital. This mutation was analogous to many mutations that cause the disease in humans.  Whilst several dog models are used for research across the world, from relatives of this dog, the Royal Veterinary College (RVC) has developed the only group of dogs with muscular dystrophy that carry a specific mutation that is in the region of the gene most commonly affected in humans so that certain treatments are potentially more applicable and valuable.

Affected male dogs at the RVC are all related to a single carrier female that was the origin of the group. These dogs are only used in specifically-approved research that is subject to strict ethical and welfare considerations. Unaffected pups are used for comparison to affected dogs, but, if possible, they are rehomed after the studies, whilst dogs with DMD are euthanised at the end of the research process or when their disease is considered, after careful examination, to have reached a predetermined level of disease severity that is unacceptable to justify their continued use in research. This predetermined level of severity is an important part of the ethical review of the research by the College’s Animal Welfare Ethical Review Board who ensure that any suffering the animals undergo is minimised and justified by the potential benefits the research will bring to the treatment of boys with DMD and dogs in the future.

The reason the RVC research requires the breeding of dystrophic dogs is that not enough cases pass through veterinary practices to be able to study them. Only one in 12,000 dogs is reported as dystrophic, although the actual number is probably much higher. Incidence is under-reported because owners often do not seek investigations when a pup is not thriving and few cases are referred for the specialist diagnostics that are required to confirm the disease. The first stage of the RVC project involves taking a life history and monitoring the development of the disease. Within this process, the research team – which includes experienced clinicians – uses magnetic resonance imaging, takes blood samples and performs gait analysis (which the College is notable for). In addition, experienced surgeons collect muscle biopsy samples, with the dog under general anaesthesia, to help determine the extent of the disease severity.

The technique used is identical to that used in veterinary patients in our hospitals and dogs receive pain killers to prevent any discomfort. In ongoing work, the dogs are being used to examine novel treatments such as to correct the faulty gene directly in the body, or to replace the faulty gene with a functional copy, or to use stem cell-based treatments to correct the muscle weakness or drugs that modify the consequences of the gene defect. If there is success in the dogs, there is a very good chance that the treatments will be successful in humans.

These treatments might then also be applicable to pet dogs in the future.

As a leading provider of veterinary treatment, the RVC provides animals participating in research programmes with the best of care, and they are surrounded by exceptional facilities. Because these particular research dogs are kept according to requirements of the Animals (Scientific Procedures) Act, they are housed in an experimental animal facility. They have access to large outdoor spaces and grassy paddocks for daily exercise and experience regular interaction with people. They are kept in social groups whenever possible. As well as supporting the welfare of the dogs while undergoing research, this socialisation makes it easy for the unaffected animals to be rehomed as pets.