His research focuses on the comprehension of mitochondrial function, quality control regulation and communication for pharmacological exploitation in mammals. His teaching is committed to the discipline of Pharmacology.

Michelangelo studied at the School of Pharmacy of the University of Ferrara (Italy) where he completed a Pharm D in 2001 after intercalating in the USA. In 2005 he earned a doctorate in Molecular and Cellular Pharmacology at the University of Ferrara under the supervision of Prof. Rosario Rizzuto where he became conversant in mechanisms of Ca2+ signalling regulation.

He then continued his training in mitochondrial physiology under the supervision of Professor Michael R Duchen at the University College London where he moved in 2005 as EMBO/MariCurie PostDoctoral Fellow following an initial award from the Royal Society/ Accademia dei Lincei.
Since February 2008 he is tenured at the RVC Department of Comparative Biomedical Sciences.

Recipient of several awards in research, he is member of international editorial boards of peer reviewed scientific journals and he is currently acting as Local Ambassador of the Biochemical Society as well as Leader of the RVC Oncology Interest Group.
His dedication for biomedical research, academic education and service towards talented scholars yielded him the Paul Harris Fellowship by the Rotary Foundation in 2014 and Talented Young Italian Award in 2015.

Michelangelo is internationally acknowledged as an expert in the field of mitochondrial cell biology and pharmacology. His scientific breakthroughs, up to date, regard the hidden pathways of homeostatic mitochondrial function and their pharmacological regulation. He and his team have also provided the first evidence for the existence of contact sites between mitochondria and nucleus via which the communication between the two organelles is routed (www.biorxiv.org/content/10.1101/445411v2).

The overarching goal of the Mitochondrial Cell Biology and Pharmacology research unit is to detail regulatory mechanisms of mitochondrial quality control and communication with the surrounding organelles to unveil early markers of cellular dysfunction as well as targets for therapeutic intervention. Michelangelo has recently received a Consolidator Award by the European Research Council to progress such endeavours.


Activity of the unit is also supported by the BBSRC, PPCT, EMBO and the Rotary Foundation as well as by industrial partners via Case Studentships.

With over 80 peer reviewed publications the citation Index of Michelangelo since his first academic post in 2008 is: 46.

Below are reported the most representative publications of the past ten years:

His studies have also generated intellectual properties protected by RVC on molecular read-outs for mitochondrial toxins in drugs attrition.

Michelangelo, who is a proud Tutor to graduate students, is Leader of the Modules in Principles and Applied Pharmacology of the BSc courses where he delivers most of his teaching. He is also teaching principles of drug selectivity at the BVetMed course and at the Graduate Accelerated BVetMed course.

Michelangelo is focused in testing novel pharmacological compounds to tackle mitochondrial dysfunction associated to pathological conditions. He is regeistred Member of the General Pharmaceutical Council formed Royal Pharmaceutical Society which entitles to practice in the United Kingdom.

Michelangelo is engaged in a series of outreach activities to divulge science and accademic education. This entails talks to charities, schools and  communities representatives. 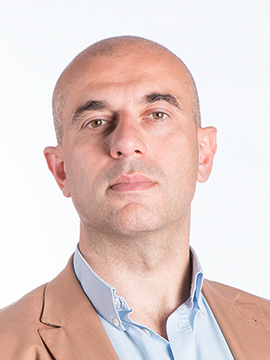