Ashleigh is currently working as a postdoctoral researcher in biomechanics on the ERC-funded DAWNDINOS project with Prof. John Hutchinson. Her research involves integrating comparative, experimental and computational biomechanics approaches with palaeontology, to address questions surrounding locomotor evolution and performance in archosaurs, including dinosaurs.

Ashleigh completed her MSc in Human Anatomy and Evolution 2015 at the Hull York Medical School, where she was involved in a project analysing craniodental biomechanics of primate mastication. Her interest in biomechanics led her to pursue a PhD in evolutionary biomechanics of locomotion in hominins at Liverpool John Moores University. She studied human substrate navigation using a range of kinematic methods and reconstructed hominin limb posture from fossilised footprints.

She is actively involved in a number of external projects focusing on functional morphology of both footprints and the foot. Ashleigh is particularly interested in simulating locomotion from fossil data.

In 2017 Ashleigh won the British Federation of Women Graduates outstanding award for research.

In 2020 Ashleigh was awarded a BA/Leverhulme Small Research Grant to conduct fieldwork at White Sands National Park on fossil footprints.

Wiseman, A. L. A., De Groote, I. E. (2018). A three-dimensional geometric morphometric study of the effects of erosion on the morphologies of modern and prehistoric footprints. Journal of Archaeological Science Reports, 17, 93-102.

Ashleigh has been involved in a number of outreach projects since 2011, having worked on events for National Museums Scotland, the World Museum in Liverpool and National Museums Liverpool. Many of these events have been quite popular, such as the BBC Prehistoric Autopsy at the National Museums Edinburgh, and the Festival of Archaeology in Liverpool.  In the DAWNDINOS project at the RVC, Ashleigh has been involved in the DinoClub, which is a project that travels to local schools showcasing palaeontology, biomechanics and science in general to school pupils.

Links to some previous events: 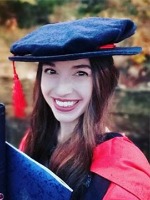